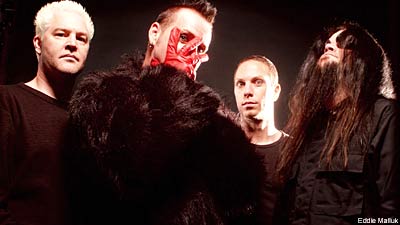 On Dec. 22, Mudvayne is back with a new record, a self-titled release frontman Chad Gray likens to the band's earliest material. If 'Beautiful and Strange,' our first taste of the new stuff, is any indication, Mudvayne's fifth is going to be ferocious.

The track, which we have for you here, is crazy tight and fast, with jaw-dropping riffage and brutal breakdowns -- plus Gray's more-than-capable pipes. "It's definitely a natural progression for Mudvayne," Gray tells Noisecreep. "But I think there's a level of ... this album is a bit retrofitted. Everyone says they're, like, writing their first record again or their second record again, but some of the parts feel like that to me, they feel like older Mudvayne."

While Mudvayne have no touring plans at the moment, Gray says it's likely they'll be hitting the road soon after 'Mudvayne' hits stores. In essence, this new record is something of a counterpart to 2002's 'The End of All Things to Come,' which some Mudvayne fans have taken to calling the 'Black Album.' This forthcoming disc is Mudvayne's 'White Album,' Gray says.

Listen to 'Beautiful and Strange'

"The way this record fits to me, it's kind of got that retrofitted Mudvayne attitude," he says. "Since we had done our 'Black Record,' I was thinking about a 'White Record,' and I was just thinking of doing a light cover. But then, I was wondering if they had black light reflective ink. Epic told me they did, so we have imagery and all that, but it is, in its true form, a white album. You put the black light on it, and everything comes out of it."

Not that Mudvayne are in cahoots with black light manufacturers across the country, but you will need one if you want to view the album's art. Without a black light, the record will just look white.

Filed Under: mudvayne
Categories: Interviews
Comments
Leave A Comment
Back To Top