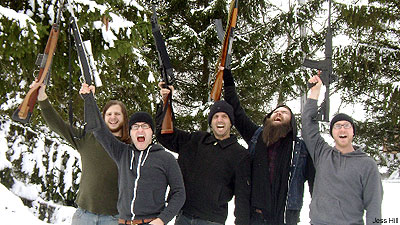 Ohio's Mouth of the Architect are seemingly unstoppable. In the band's seven years they've been through enough member shifts to birth four new bands, but they've been unwavering and kept their hibernating short. "The central theme of the band is the same I guess, but just like anything else this band has gone through a lot," drummer Dave Mann told Noisecreep of the post metallars focus. "We've always tried to treat this band like it's an entity of its own -- just like anything organic, it has to change in order to survive." On the band's newest offering 'The Violence Beneath' EP, the five-some tie up loose ends with a live song and a cover while showing off a gaze into faster material in two new songs.

"All of our lives are in a tremendous phase of change and progress -- I think that contributed to the more direct approach on those two songs," Mann revealed. "Also, we started doing this band about seven years ago when there were a lot less bands doing the kind of stuff we do. We're all big fans of progressive rock -- both past and present -- so we tried to make these songs a little more involved and less droney. I think there's always the spirit of pushing in a new direction when we write for a record."

He adds that new direction is displayed on the driving title track and the somber acoustic 'Buried Hopes' anything could still develop on the next full length. "We definitely do things in a certain way, but we allow enough freedom in how we do it, that each record has an identity of its own."

On the band's sixth release one long time goal of covering a song on record can be checked off. Up until this point the band had never been able to agree on what song to put their chilling epic twist to. "The one thing we could agree on was that we wanted a recognizable song that no one would expect us to cover, and to make it totally different -- as if maybe we wrote it," Mann explains. "Eventually after years of pitching the Peter Gabriel song, [keyboardist] Jason [Watkins] made the necessary push and got [guitarist] Steve [Brooks] to sketch out the song as he was hearing it. It didn't take long before it was clear this was going to be the cover for the EP. It just worked out so easily."

Buried in fuzz it's not until the echo of the classic longing chorus that 'In Your Eyes' is even recognizable -- but through this something wholly unique for Mouth of the Architect are revealed, a capturing of hope within a song. Always one of the gloomiest bands, Mann points out life in the Midwest might be why there has always been an embracing of darkness to their sound. "All of us are very creative, expressive people and the Midwest is devoid of anything new or exciting. Write what you know, right? Also- the music we write is rather emotional and thought provoking, so it wouldn't really be appropriate to sing about girls and happiness and stuff."

Filed Under: mouth of the architect, MouthOfTheArchitect, peter gabriel, PeterGabriel
Categories: Interviews
Comments
Leave A Comment
Back To Top