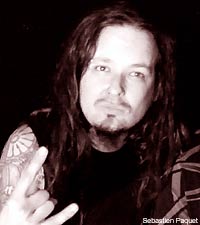 This week, Korn frontman Jonathan Davis will begin recording his vocal tracks for Korn's ninth studio LP, which they've nicknamed 'Korn III.' The follow-up to 2007's untitled effort sees Korn working once more with producer Ross Robinson, who produced the band's first two albums, 1994's 'Korn' and 1996's 'Life is Peachy,' and Davis tells Noisecreep its something of an unintended return to the group's roots, and not a concept, as initially planned.

"It's really like the old school stuff ... like the first two records," Davis tells Noisecreep. "It's just going back to our roots, working with Ross ... it's just been amazing, and it sounds like nothing we've ever done. It's more in the vein of the first two records, and we're really excited about it. And working with Ross, it just sort of evolved out of us, naturally. He's got us going back to the old school-style of how we were writing, and how we all just sat in a room together and did all this stuff so. We're excited ... it's just how its been taking shape."

Davis and the rest of the band -- guitarist James 'Munky' Shaffer, born-again bassist Reginald 'Fieldy' Arvizu and kitman Ray Luzier -- initially wanted the record to revolve around a concept ... one Davis identified as the five symbols he feels will be the downfall of man: drugs, religion, power, money and time. But things have changed.

"It's turning into something else," Davis says. "I was going for that, and I was writing lyrics and stuff around that vibe. And other stuff started coming out, and I can't control what's coming out on my inside. So, the music's ... it always changes. I can start out with a plan, but it's just turning into different stuff. We've got 13 or 14 songs, and the guys are taking turns doing bass and guitars. The drums are all recorded. It's our most diverse record, and I think it's going to make all of our fans happy, and they'll all be very surprised."

Davis says the band is shooting for an early 2010 release for 'Korn III,' but at this point, Korn is without a label. The singer says the band is considering following in the footsteps of Nine Inch Nails and Radiohead, and that they may actually release the LP on their own. "That's an option," Davis admits. "We're going to weigh out all our options and see what's best for us."

At this point, Davis says former drummer David Silveria is just that, the band's former drummer. "I don't think he wants to play drums anymore," he says, before adding that a reunion with former guitarist Brian 'Head' Welch wasn't likely: "We'll see if it happens in time, its just not the right time now."

Following the touring and promotion cycle for Korn's next one, Davis says he'll return to the studio to finish his long-in-the-works solo record, which he claims will be much "different from Korn ... it's more like a heavy David Bowie and Peter Gabriel. It's really cool."