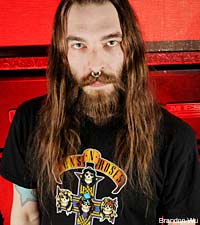 Getting the chance to chat with your favorite musicians about what gets their toes tapping is always an interesting experience. It usually yields a few more surprises than you might expect (like the time Blake Judd from Nachtmystium got all giddy over my roommate's Steely Dan records – but that's another story). Noisecreep tracked down the ever-genial Aaron Deal of Virginia doom haulers Salome to find out what he and his band mates listen to in their feedback-free time. And we discovered that a profound love for Steely Dan is more widespread amongst metal dudes than you'd think.

"Wino's solo album, 'Punctuated Equilibrium,' is getting a lot of play since it came out. The two metal albums that stick out in my head from last year are Mouth of the Architect 'Quietly' and F--- the Facts 'Disgorge Mexico.' I've been listening to Gorguts 'Obscura' a lot recently as well. In the van, we'll usually listen to metal before a show, then after the show we usually switch it up to something mellower like some Miles Davis or Herbie Hancock or something. At home anything goes. I try to listen to vinyl at home, and the record that's on the deck the most the past few months is Steely Dan 'Aja.'"

Salome vocalist Kat lent her vocal stylings to the new album from Scott Hull-approved spazz-grinders Agoraphobic Nosebleed, which sent shockwaves through the grind community earlier this year when they discovered that ANB had actually written songs this time around. "We've heard it. I think it sounds great. It is a little bit different than stuff they've done in the past, and to me it's better," Deal said. "The songs get fleshed out a little bit more and have a chance to develop. It's also cool to hear Kat's vocals over music on the opposite side of the spectrum from Salome. I think people will be surprised and stoked when they hear it."

Additionally, Deal seems to hooked on another, more mainstream, metal act. "To me, Mastodon just keeps getting better and better. 'Remission' pretty much blew my mind the first time I heard it, and every album since then blows my mind all over again. I think it's awesome that they are doing their own thing and pushing the envelope instead of just putting out the same record again and again. What I've heard of their new album is incredible, I've already pre-ordered the super deluxe version of the CD and can't wait to get it! Hearing the song 'Crack the Skye' for the first time live with Scott Kelly was priceless."