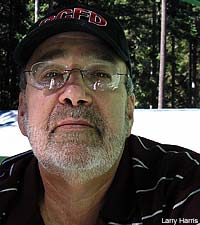 Casablanca Records was one of the most successful labels during the 1970s. In terms of disco, they had no real competition with acts like the Village People and Donna Summer on their roster. But it was their 1973 signing of Kiss that helped fund the label's later foray into disco -- and later, feature films.

Much has been written about Casablanca Records during the years, but a new book has just hit store shelves that tells the label's story from the inside. Written by former label vice president Larry Harris, 'And Party Every Day: The Inside Story of Casablanca Records' is a firsthand account of the company's glory days, told with unflinching honesty and detail.

Noisecreep caught up with Harris and asked him about his and the label's early days with Kiss.

Can you talk about the first time you saw Kiss play at their audition for the label? Was it as magical as their hardcore fans would expect?

It was definitely not anything like that for me (laughter). First off, I had to get over the loudness of the band. We were all crammed in this little rehearsal room in Manhattan, and here they were playing at full volume. I'm a promotions guy so the first thing I thought about was, "How the hell are we going to sell this band?" I was taught in the business that you just have to find a way to get your records played, and sometimes you have to psyche yourself into it. I had to get past how loud they were in there that day and start thinking of ways to push them.

How about the elephant in the room that day? I'm obviously talking about the makeup.

I got past the makeup thing quickly. I had already worked with Genesis at that point, and they had a strong visual sense about them, too. [Peter Gabriel] did all sorts of crazy stuff when they played live. I also worked with Sha Na Na, and they were dressed like guys from the '50s in the middle of the 1970s, so that was actually harder to market at times.

Did you remember any songs particularly sticking out as potential hits that first encounter?

I liked 'Strutter' right off the bat. Most of the stuff they played that day was hooky. But you have to understand, I had already listened to the band's songs, because I got a hold of the material that had recorded for Epic Records when Gene and Paul were playing as Wicked Lester. So I went to the audition with some of the stuff already in my head.

In your book, you describe the band as quiet. We're guessing that Gene didn't already have that larger-than-life arrogance about him?

Not at all, man! I tell this story in the book, but I took the band to go see the Who play an arena early on and the entire car ride to Philadelphia the guys were silent. I had to ask direct questions to get anyone to say anything and even then, Gene was the only one who would. But he wasn't talkative. I think it might have been [longtime Kiss manager] Bill Aucoin who got them in that whole 'record label is the enemy' kind of mentality, so they were being careful around me (laughter).

Casablanca Records, like a lot of other labels during the 1970s, was guilty of a lot of the excesses of that time period. Even though Kiss was the biggest rock act on the label, not everyone was living up to the stereotype of the crazy rock star.

You are right about that. I know people already know about Gene being completely against drinking and drugs, but Paul Stanley was the same way. I don't think I ever even saw him drinking a glass at wine at dinner. Now Ace Frehley and Peter Criss were the extreme opposites of that. It came back to haunt them later on, but they weren't that different to most of the musicians of that time period.

Who did you get along with best in the band?

Oh, definitely Paul. We spent some fun times together. We were both from Queens, N.Y., and I liked him a lot. I remember taking him clothes shopping with the company card. I used my expense account all the time to get our artists stuff, but with Paul I got him a lot of clothes. Don't get me wrong, I liked hanging with Ace and Peter, too.

Peter and Ace have always seemed like guys you would know from your neighborhood who just happened to be in a popular rock band.