Michael Alago is one of the most original and passionate music people you could possibly hope to meet.

At 53, his career has spanned decades: first as a club promoter in the '80s. Then, as an A&R man for Elektra, he put an indelible stamp on the history of metal by signing a little band called Metallica, changing the course of heavy metal as we all knew it.

A few years later, while serving at Geffen, Michael inked a strange underground band from the sewers of NYC called White Zombie. Add the Misfits, Metal Church, Flotsam & Jetsam (amongst others) to that frothy brew and this quintessential New Yorker certainly gets metal mover n' shaker stripes emeritus.

Outspoken, energetic and openly gay Alago remains a fixture on the New York scene after exiting the record business in 2004. In recent years, he's turned his attention to his other passions: literature and photography. He's penned a book of poetry and musings entitled Night Blooming Jasmine Will Never Smell the Same with cohort and collaborator Mina Caputo, also singer of Life of Agony. He's also published two volumes of a photobook series entitled Rough Gods.

Noisecreep recently cornered the legendary Alago to hear tale of growing up in the New York scene; his legacy, working with legends and a career spent bucking against the mainstream.

What drew you to aggressive music in the first place?

I love that you are asking me this question in 2013 as a 53-year-old gay man who loves metal but also really loves all kinds of music from Sinatra to the Misfits. Metallica to Nina Simone and PiL to White Zombie, all artists I signed or worked with except for Sinatra...dammit [laughs]. What draws me to metal is the loudness...the white noise. The louder the better, for me. I love the smell of beer and leather and love that its like 99% guys who attend these concert - had plenty of bromances [laughs]. Also like in any kind of music, I'm always looking for greatness in songs and personalities.

What is your background: where did you grow up?

I grew up in Brooklyn under New Utrecht Ave, right near L'amour. I went to Bishop Ford High School for 9th and 10th grade then went to city-as-school and graduated from there and went to one year at the School of Visual Arts before I looked for my first job in the music business.

You were a promoter in the '80s and put on shows at venues like The Ritz, correct?

The Ritz was my first gig in the music business when I was 19 years of age. I answered the phones, got everyone in the office their lunch and opened the mail. My boss, Jerry Brandt, had this kinda blind faith in me and my musical tastes and soon afterwards I started dealing with agents on the phone and helped to book concerts there. The most infamous gig there was when Bow Wow Wow cancelled and at the last minute I booked PiL. It was historic. It was supposed to be a concert that turned in to a riot that got worldwide press. Folks still talk about that event like it was yesterday. It cemented my friendship with Mr. Lydon and now 32 years later, we are still pals. At one point I signed PiL to Elektra records. 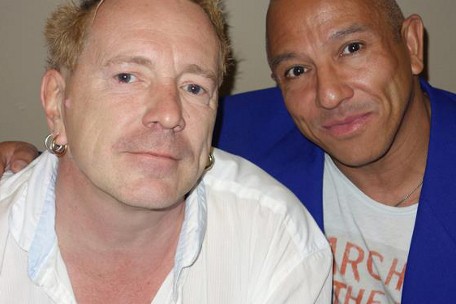 What was the New York scene like back then? Did you see any notable and classic bands or shows?

I was a wild child in New York City and started hitting' the streets when I was like 15-years-old. Never got carded and looked like I was 12 [laughs]. I was everywhere in the early days. Max's Kansas City, CBGBs, Gildersleeves, Cat Club, 7A, as well as the porn theaters. The scene then was awesome. You could go out every night of the week and see something fantastic. You would start at early 8pm shows and find bands going on to perform 1 AM and 2 AM sets. New York City was down and dirty and that's how I liked it. I saw everything - Fugazi, Cro-Mags, Black Flag, Suicide, Heartbreakers, Ramones, Blondie, Patti Smith, Bad Brains etc. The list goes on. If they came to NYC, I was there. I ran the Dead Boys fan club with my friend Jody back in the day as well.

What was different about the music scene and the music business when you first started out? How does it compare to now?

My first concert was Alice Cooper at Madison Square Garden. The last night of the Billion Dollar Babies tour 1973. I was 14 and that changed my life forever. My concert days had begun. I loved watching 'American Bandstand' and 'In Concert' and 'Don Kirchners Midnight Special.' I knew from those moments I had to be in the music business in some shape, way or form. Back in the day, in NYC, there WAS a scene like I mentioned earlier, you could go out every night and see many bands in one evening. I was lucky enough to work for two awesome record labels Elektra and Geffen Records. We operated like boutique labels but lived under the umbrella of WEA. All the A&R people were very particular about their signings and that made for an incredible roster at both labels. 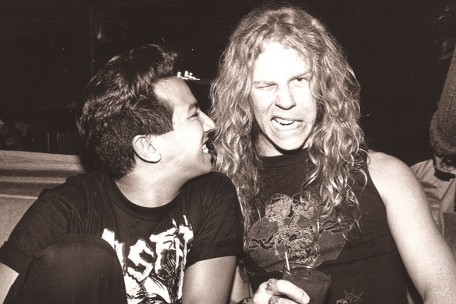 At Elektra we had everyone from Metallica and the Crue to The Cure and PiL. At Geffen there was White Zombie and Guns N' Roses and Whitesnake and Sonic Youth...you get the picture. Back in the '80s, there was artist development and A&R people took risks and labels spent money. Then somewhere along the way, the Internet reared its head and labels stopped paying attention. Chains like Tower Records and Virgin Mega Stores stared closing down. It's such a long story but the majors didn't pay attention then that the Internet was a powerful way to get to hear new music. Then teenagers started to use Napster and Limewire, etc. Folks were downloading everything and record sales were slipping fast and still companies were still trying to market and promote artists in old fashion ways using old templates that just didn't work anymore. I left the biz summer of 2004. I had enough. My last gig was at Palm Pictures where I worked with Fozzy and Local H and Speedealer.

What was your first signing and for what label?

My very first signing was for Elektra Records and it was a band from Red Bank, N.J. called Shrapnel. Funny enough, Dave Wyndorf and Philip Caivano were in that band and later formed Monster Magnet. Daniel Rey was in it and is an awesome guitar player. He's a great friend and produced many records for the Ramones.

What were some of the great bands or performers that got away? That you weren't able to sign?

As an A&R person you just can't sign everything but I would say I would have loved to sign Slayer.

You're working with several artists now. Who? You're doing some producing, right?

I mostly work with Cyndi Lauper these days. I A&R'd/executive produced her last two records. One was a dance record called Bring Ya to the Brink and her latest recording, Memphis Blues, for which we got a Grammy nomination for best contemporary blues album. I have recently had some discussions with John Joseph from Cro-Mags about producing a five song EP for them and putting it out myself with some great distribution. For all of you who know me know that I have loved the Cro-Mags in all their forms for decades and up to this day I attend as many shows as I can because the music still kills me. I love it and John is one helluva great performer. Very generous onstage. I hope this happens. 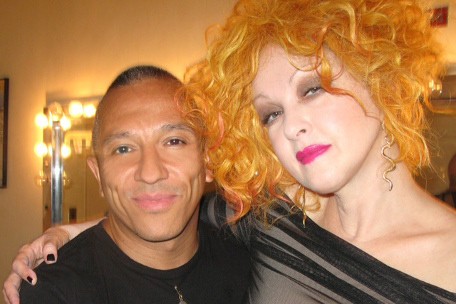 You pretty much never gave a shit about being openly gay while working with plenty of aggro, macho dudes in the hardcore and metal scenes. What was your mentality and how much prejudice did you have to deal with?

Gay? You mean happy? Yes, that's me. I never had problems with anyone because of my sexuality, which is only one part of who I am. If anyone had a problem with me, well they never said it to my face. I embrace who I am and my entire being. I think being a positive upbeat person and loving people like I do just made me exactly like everyone else.

Are you still in touch with many of your old artists?

I am in touch with Lars Ulrich and Jason Newsted. Rob Zombie and George Lynch and John Lydon and Kurdt Vanderhoof [Metal Church guitarist]. So yea, sure I guess I am. 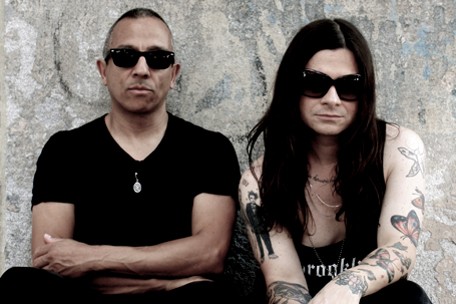 In your post A&R career you worked with Keith, now Mina, Caputo, on poetry and readings. You also have published (or are about to) two volumes of photography called Rough Gods. Can explain what those are and what how do they fulfill you artistically?

Yes, at some point I think it was 2001 I produced Died Laughing, Keith Caputo's first solo record. Keith has now become Mina and is transgendered and we wrote a book of poems observations and rants called Night Blooming Jasmine Will Never Smell the Same. I am working on another book of observations, which is what I like to call the pieces and trying to have it available this summer.

There's a documentary film being produced on your life, correct? When can we expect to see it?

Oh my, yes there is talk about a doc about my 25 years in the music business and beyond. It's very flattering and I am thrilled. Everyone is still in the 'lets have lunch and discuss it' stage and its all-very exciting.

If you have had a legacy as an executive and an artist, how would you sum it up?

Wow, this kinda puts me on the spot a bit, but I think I would like to be know as someone who helped bring great music to the world and that I was a fair and loving and honest person. That I made others laugh and that they felt comfortable and confident around me. My love of life is very strong so I hope have felt that too. So if we run in to each other on the street or at a concert come say hello as it's always about a connection.