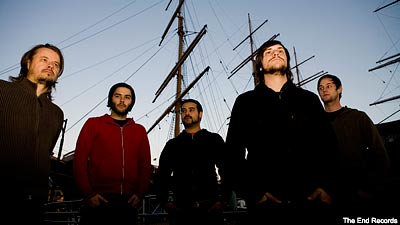 Vans get stolen, trailers get raided for their equipment, but most bands never get to see the person or people that turned part of a tour into an ordeal. However, last night two members of Hull did, and they saw a gun.

Soon after transforming the crowd at Saturday's Planet Caravan festival in Asheville, N.C. into a heaped mass of swaying heads and extended devil horns, the five members of Hull left for the next date of the Beard Destroyer Tour alongside tourmates Salome and Batillus bound for Cincinnati.

Late last night, though, the band updated Twitter with news of being robbed. "Sean and Carmine got mugged at gun point! They safe." The update also added context of laugher and a little worry. "So we're about to play and I'm drinking a camo high life. Cinci is awesome! Watch r van."

By this morning the band had made a fuller, but still brief, update via their MySpace blog reiterating thankful feelings that at least no one was hurt and asking for any help on these final days of tour, which for anyone that has been on a tour consisting of all lesser known bands the money front is hard enough without having been mugged.