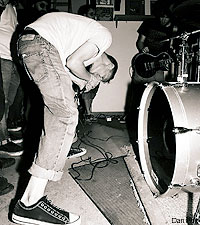 Since 2007, Thou have been a massive presence of heaviness. At first they were just viewed as a doom band, but as the Louisiana-based five-piece have experimented over 15 releases, they've grabbed onto feelings beyond bleak and desolate making each release a bit unexpected

But the band wasn't exactly the heavy masterpiece they are now when they started. "Our very first demo (that probably only a handful of people here in Baton Rouge have a copy of, assuming they didn't throw it away) was definitely a lot more post-rock sounding," guitarist Andy Gibbs revealed to Noisecreep via e-mail. "In fact, it wasn't nearly as heavy as we were hoping it would be. Then one day, [guitarist Matthew Thudium] came to practice with this weird new tuning that just made everything we wrote sound heavy as hell."

There was no agenda for the band during the era of their first album, 'Tyrant,' according to Gibbs. "It was a simpler time, you might say. We would just be hanging out at our practice space listening to music, and then we'd get up and go write a song. For 'Tyrant,' we had no plans to compile the songs into anything cohesive. It was all just hanging out and jamming."

Since that first long player, which the band self-released, things have soared, and eventually Southern Lord re-released the debut. "Andy Low who does Robotic Empire [Records] was really into that record but swamped with other stuff at the time, so he told us to send it over," vocalist Bryan Funck recalled, also noting a family member of drummer Terry Gulino was pushing them to send it to the label known for its experimentations and wondrous vinyl layouts. "I mailed an LP to Greg [Anderson], he was into it, and he called us up about doing a repress. That's pretty much how it all started with them."

A major question as of late has been if any of the black metal touch on the most recent split releases point to the direction of the upcoming third album, 'Summit,' which was just recorded. "There's a bit of that coming in the next full-length, but it doesn't dominate the album or anything. None of the split songs are totally indicative of where we're heading, but 'Loneliness Dances in the Gorgon's Stare' is the closest of the bunch," noted Gibb,s referring to the band's split with Moloch.

One of the more recent releases from the band was a 12-inch split with Salome. Thou's side contains two songs, the second being an orchestrated instrumental -- free of lurching riffs. "That string outro was written by Bryan's common-law wife/spiritual partner Emily [McWilliams] using themes from the song that precedes it, and it was recorded by some friends of hers," Gibbs explained. "I couldn't believe my ears when I heard the end result. Simply amazing. We take no credit for that one." Funck added his partner also plays a little on 'Summit.'