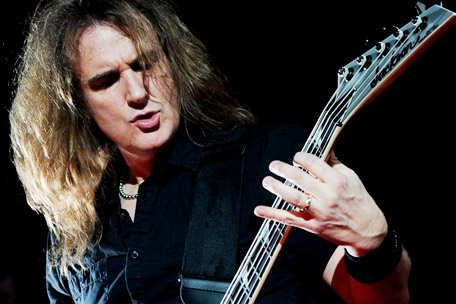 The founders of metal behemoth Megadeth are no strangers to the hell that Amy Winehouse endured while publicly battling addiction in the final years of her life. Neither bassist Dave Ellefson nor frontman Dave Mustaine shy away from detailing the ravages of living life on the edge where getting high reigns supreme. Noisecreep spoke with Ellefson -- once again a full-fledged member of Megadeth after a lengthy feud with Mustaine was finally put to rest last year -- hours after the world learned of Winehouse's tragic fate.

Here, the legendary metalhead offers his opinions on drugs, demons, and how Mustaine, then struggling with addiction himself, unknowingly started him down the path to recovery. Ellefson also toasts Megadeth's forthcoming album, 'TH1RT3EN,' which, signals a return to form for the iconic band, and explains why he's not bothered by the sluggish sales of Megadeth's 25th anniversary reissue of 'Peace Sells... But Who's Buying?'..

Given your public battle with drugs and alcohol, the news of Amy Winehouse's untimely death must hit close to home.

It's very sad. She's been pretty open about her troubled life and the addictions, and as a recovered guy, my heart always goes out when I see that happen because there's a lot of misunderstanding behind over coming those personal issues. My prayers are with her family right now and all the people in her organization, because it's unexpected but it's a reality, and everyone has to deal with it.

When you're plagued by inner demons some see it as dancing with the Devil, which is along the lines of what Dave Mustaine was talking about in his recent interview for ABC's 'Primetime Nightline: Beyond Belief -- Battle With the Devil.' What is your take on Satan?

I actually just got accepted to go into a seminary program within the Lutheran Church; they bring up people within the congregation, it's a graduate level course. I'm fairly well steeped in the world, and having been clean for several years, that's kind of a natural progression for my walk.

Is there any truth to the story that Dave Mustaine convinced you to attend AA in his place back in the '80s and that's how you eventually got clean, because the 12-Step Program stuck?

Years ago, I filled in for him at one, and my first thought when I got out of there with these nice old men who'd asked me to share my story, and I'd actually shared Dave's story instead, was, "Oh my gosh! We're all going to get arrested and go to jail!" And I thought, "Wow, hope I never have to go back there again." And then in 1988 I had to come to terms with my own addictions, which were heroin and cocaine and alcohol and pot. Imagine walking up on the stage of Donington [Park in England] in front of 110, 000 people -- a childhood dream -- and two days later I'm sitting in Van Nuys Hospital for drug and alcohol rehab, people telling me I have to surrender. And I'm like, "What do you mean I have to surrender?"

So I understand the difficulties people have making the transition. I think the idea that you have to give up everything is a hard line to walk over -- simple but difficult. Especially here, it's good ol' rock 'n' roll, we glorify the excess; the excessive, the better -- take it to the wall. And for me, when one of us falls, the devil laughs. And whether you're religious or not,there's a darkness around that.

When did you finally kick your addictions?

I finally got clean in 1999. Dave [Mustaine] and I -- it was almost a competition between us to get clean first.

Well, Dave did and then I did, and then, well... obviously, he's been open about his walk [to recovery] and all that in his book, ['Mustaine: A Heavy Metal Memoir'].

You were gone from Megadeth for nearly a decade, what was your biggest concern coming back into the fold last year? Most would assume it would be the bad blood between you and Dave Mustaine.

I was excited about coming back to Megadeth, but for me, you can't go back to the same river twice so I wanted to make sure that what Dave and I were going to start anew was going to something that was definitely, to use a biblical quote, something built on the rock not on the sand. Something that would be lasting, because we had once chance to do it. You don't want to do it and have it fall apart because then it's egg on everybody's faces. So for our fans, I wanted to make sure it was solid so we kind of did it one day at a time. And that's still how we're doing it a year-and-a-half later -- one day at a time and everything seems to be flowing along naturally.

What was it like being back in the studio to record Megadeth's new record, your 13th, aptly titled 'TH1RT3EN'?

For me, coming back to Megadeth, it was just so perfect: I was able to come back and do the 20th anniversary 'Rust in Peace' tour because it was just a celebration and we already knew the songs. And it was a lot of fun and gave us a chance to take it around the world for a year to make sure we were comfortable in our friendships and relationships and positions in the group before we dived into the process of creating and recording -- because that can either be a pleasure or a minefield.

And I'm really glad [producer] Johnny K [Machine Head, Staind, Disturbed] was available to do it. I think that was a really good turn in the road for Megadeath because there's a whole side of Megadeth that's been there since our very first record: our use of melody, of writing great hooks and these very memorable, big festival riffs we have. and that was really what I was hoping we'd be able to pull back to the forefront, and the relationship that Johnny and Dave Mustaine had was really productive and I think we have that record now back in the can again.

The album comes out in November 1. Is the record release date still a special day for you or is it old hat after all these years?

The pinch me moment is actually when you hear your song on the radio. You're driving down the street in your car -- which, for me, would be at home in Phoenix, Arizona -- and you're just like, "Wow." 'Cause I don't care who you are, to hear your song on the radio, that puts you back to that I'm-a-kid-who's-a-fan mode, the call home to mom moment. We've been doing this almost three decades and it's nice that we still have those moments, because those inspire you and keep you fresh and keep you excited to wake up and do it another day.

Lastly, Megadeth recently reissued your landmark 1986 album, 'Peace Sells... But Who's Buying?', can you tell me what that record means to you and how you feel about it's poor performance sales-wise as a 25th anniversary reissue?

I don't feel like it's been that long. We have a few more creature comforts on tour, but at its very essence, it's still Megadeth -- especially with me and Dave. You don't set out to make landmark albums, you're just making the best album you can at that time. And for our fans to have championed that one and for that bass riff to be used on MTV [as the opening theme to 'The Week in Rock' show], those are free gimmies that you get and they make you smile inside and appreciate it.

[As for sluggish sales,] there are two things: One, I think people are excited about the new album, and two, it's like a commemorative release, like the 'Rust in Peace' tour, it's just sort of a celebration.

Filed Under: Megadeth
Categories: Exclusive, Interviews
Comments
Leave A Comment
Back To Top