Not only has Chris Kontos been a fixture on the Bay Area scene as skin-basher for the likes of Machine Head and Testament (just to name a few), he's also made it his mission to aid refugees escape oppression – simply for the music they listen to. He's founded a coalition of mercy called A.F.A.R. (Alliance for Artist Rescue) whose mission statement is simple: NO BAND LEFT BEHIND!" Their mission: coming to the aid of imperiled Middle Eastern Metal heads being persecuted for their non-Muslim beliefs. Or, making the world aware of the plight of Indonesian punks being sent to detention camps for "moral rehabilitation." And that's just for starters.

Inspired by the 2008 Vice Magazine funded film Heavy Metal In Baghdad, which chronicled the struggles of the Iraqi metal band Acrassicauda, Chris realized he could make even more of a difference. "In the end [the film] was a puff-piece for Vice Magazine so they could sell American Apparel and bad skating shoes." he laughs. "But I put some clips from the film on my Facebook page and immediately got responses from kids stuck in Turkey and Iraq."

Kontos caught wind of how horrific the situation while trading messages with Iraqi band Dog Faced Corpse. "They were walking to rehearsal and saw a large group of people surrounding a telephone pole," he recounts. "They then saw that a young man had been decapitated and had his head's replaced by a German Sheppard's head. The guy was nailed to the telephone pole, a victim of secular infighting ' Samer (vocalist) looked over to his bass player and his bass player said: 'that's the name our band: Dog Faced Corpse.' It's not the same as sitting in your mom's house in Florida, writing about death and dismemberment. These guys are writing about what they step over every day."

A.F.A.R. has already spread awareness not merely of the persecution of metal musicians who are branded Satan worshippers for the "crime" of growing their facial hair or wearing Slipknot and Megadeth shirts but also of the purgatorial hell many of them receive as refugees awaiting transfer to the U.S.

"Metalheads need to be handled in a different way," says Kontos. "Even refugees who want to escape the same tyranny and forced oppression can be terrified of metalheads. The same with UN caseworkers. The people we're trying to reach out to need to be able to see beyond the cold, strict ocean of refugee systems and organizations and they need to see horns."

The case of Iranian guitarist Artak Ozan is a real success story for Chris.

"On a whim, my wife went online and Goggled 'Iranian Guitar Shredders', Chris recounts. "Before that we had learned that it was really hard on Iranian metal heads. They were facing stoning and imprisonment: really harsh punishments. So up pops this guitar player in Istanbul. We watched a 40 second clip and we were blown away. He was Jason Becker quality on guitar. My wife reaches out to him and he writes back: 'I need help'. What unfolded was this huge, heroic story of this guy, Artak Ozan who at age 20 escaped across seven checkpoints from Iran into Turkey and then lived on the streets until he was able to obtain a case number from the U.N. through us and his hard work. With the Catholic charities of the East Bay. we worked hard to get his health card and his green card. Now he's here and he is fully integrated into the metal scene – he even played guitar at Gary Holt's wedding!"

Not only has Chris focused his efforts on his now-legit non-profit organization, but he's also flying the flag for the recently reactivated Attitude Adjustment, the legendary Bay Area crossover-thrash mob he formed in 1985. "We started seeing the name on patches and the backs of jackets and it made us think about coming back," says Chris. Impromptu reunions with fellow classic hardcore reunitees Raw Power and Christ on Parade lit the match for a full on reformation of the original Attitude Adjustment lineup (which actually predates the Andy Anderson-fronted American Paranoia LP released via illustrator supremo Pushead's Pusmort label). Armed with a new Tue Madsen (The Haunted, Sick of It All) produced album, No Way Back, Attitude Adjustment is back, pissed and proud as ever.

"The reverence for the band has blown me away," says Chris. In November, Attitude Adjustment played a handful of shows on the West Coast with Municipal Waste and Napalm Death who actually covered the AA classic "Dope Fiend" on their Followers Not Leaders Part 2 album. "Barney (Greenway – Napalm Death frontman) joined us onstage at every show. I think it made a lot of new kids and die-hard grind fans stand up and take notice."

Chris' time behind the kit with Machine Head during their Burn My Eyes era may be what metal fans know him best for. Truthfully, it's a topic he's sick of talking about. "What's more important for me now is the relevancy that record carries," says Chris. "The production, the trends that it set. It's well known that me and Rob (Flynn) don't get along. We never really did. We're cut from totally different cloth."

A one-time war-of-words with Machine Head main man Rob Flynn aside, Kontos has an unerring respect for his former band mates. "They battle. It's been a hardcore, long road for them and they've done some really cool shit," stats Kontos. "Rob is unrelenting in his drive forward. Burn My Eyes is definitely their chalice of blood that they've been searching for like Knights Templar. But you can't replace the chemistry and the personalities that made up record. For example, Rob and I always looked at Logan [Mader – original Machine Head guitarist] like a two year old who picked up a guitar. He put his hands in places they weren't supposed to go and the results were fucking awesome. He was really like an alien."

As shocking as it might seem, some of Chris Kontos' favorite experiences happened "playing with the Grateful Dead scene." "I got to play with some living legends like Vassar Clements and Commander Cody. I felt for a while I had filled my cup with metal. I was brought up on so much blues and rock and classic Southern rock, I felt like I could do more than just play metal which for me at the time was a very narrow corridor."

While playing with The Servants, a band he describes as "Guns N' Crowes-es" Chris received one of the greatest compliments of his professional career. While opening for Motorhead, he received the blessing of Saint Lemmy himself. "Lemmy and Filthy Phil watched the entire set and after we finished, Lemmy came up to me and said, "That was the first real rock 'n' roll band we've played with on this tour.' That was huge."

Those are just a couple of pit-stops in the 42-year-old Kontos' resume as one of metal's most prolific kit-minders. While brief stints in Testament, Exodus, Spiralarms and Denmark's Konkhra (which also featured Obituary/Death axeman James Murphy) fill his resume, these days, it's more than music that drives him.

"People will ask me why I'm not putting my efforts into working with wounded warriors or some other American cause. I'll often get, 'This isn't very patriotic, working with Iranians.'" says Kontos. "Well, to me, I see it another way, I'm creating Americans. These are intentional Americans. These are people who want to come here and become totally functional part of our society, part of the arts. Isn't that why our soldiers are fighting for these freedoms?

"I kind of revel in bashing back the 'USA! USA!' with the louder USA!!! USA!!!!'" he chuckles. "I just have to keep my composure and hammer back with intelligence. After all, I am just a drummer over here, right?" 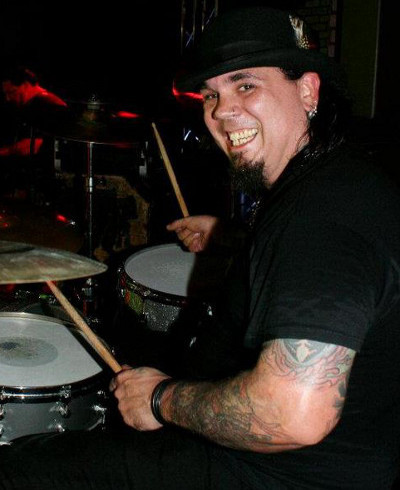 Get more info on Kontos and A.F.A.R. on Facebook.