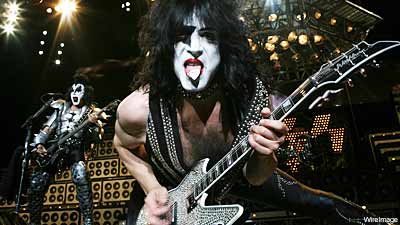 By Paul Stanley's estimation, more than one million fans have seen his band Kiss play worldwide within the last year. He calls it the biggest tour the act has done. So it makes sense that Kiss would release an album, 'Sonic Boom,' to celebrate those successes.

"It's been a huge, huge year for the band," Stanley said. "It's probably the biggest tour and most successful we've ever done. The band's never been better. And it really seems like a time where we could actually -- if we put our minds to it -- put something together that would be definitive and something we could be proud of. The last thing I wanted to see us do is make a Kiss album that disappointed people. This one hasn't."

'Sonic Boom' is due to hit Walmart and Sam's Club stores on Oct. 6. Kiss' first new material in 11 years, 'Sonic Boom' is the centerpiece of a three-disc set that also features a completely re-recorded greatest hits CD as well as a live DVD shot in Argentina during the band's recent Kiss Alive 35 South American tour. The album was recorded during a six-week period in between tours, said Stanley, who produced the collection.

"It was a very quick process," he said. "First and foremost, the most important decision that had to be made was, was I going to produce the album? That was for me a deal breaker. I wouldn't go in the studio again and do an album unless I was going to produce it. Once that was decided -- and I have to say it was decided in a split second, everyone said yeah -- it was a matter of a few ground rules.

"The first and most important being no outside songwriters. I think it's an easy way for people to do less work and also to dilute what the band is. You have someone interpreting what you are instead of you being who you are. That was the most important. From there, it was easy. Basically, the album was written rehearsed and recorded while we were on tour."

The band members -- which also include vocalist/bassist Gene Simmons, guitarist Tommy Thayer and drummer Eric Singer -- penned songs in hotel rooms and at their homes when tours ended.

"I don't know if we've ever really done it quite like that," Stanley said of writing in hotel rooms together. "When we were home, we'd go over to each other's houses. It didn't take long. It was written very quickly. We didn't want it to be brain surgery. We wanted it to be natural and organic. We did it that way and then we went and rehearsed and literally recording the album took six weeks. It's rock 'n' roll, not rocket science."

Stanley explained that producing 'Sonic Boom' was not a difficult task because he's not only a member of Kiss, but a fan.

"I know what was wrong in the past, and I know what we needed to do," Stanley said. "It was really a fun process. I have to say everybody will tell you we've never had more fun working, and we never found it easier. It was effortless to turn out something that was great. When you have four individuals who are working toward the same goal, instead of people who are trying to figure out how to further themselves within the band, it's real simple. When everybody's working for the betterment of the band, ultimately it makes everybody shine. When that's lost on people in the band, that's when you're in trouble."

It's also troubling, he said, when a band has to meet songwriting quotas because members demand to have their tunes on an album.

"It only means that you compromise from the start," Stanley said. "A song that may be better doesn't get on the album. Everything that's on that album belonged on there. It was only on there because of the quality, not because of who wrote it or because who thought they should be showcased or spotlighted."

Stanley was quick to add that Thayer and Singer are full-time contributing members of Kiss. "It's interesting, because some people want to believe this is Gene's and my band and we have two side guys," Stanley said. "The only way we could have made this album is with Tommy and Eric. Gene and I weren't capable of making this album.

"When you try to create a band when there is none, you fall real short. With Tommy and Eric, it's funny because Tommy is the person I most likely go to -- and so does Gene -- when we have a question about what we should be doing. It's always Tommy we go to. It's funny that those guys are still in some people's minds, a question mark or get dismissed, which is crazy. They are all over that album big time -- and not because they were told what to play. Those guys are 25 percent each of this band."

'Sonic Boom' outshines albums in the rest of the Kiss catalog, Stanley explained. The band's last album, 'Psycho Circus,' Stanley said, was enough of a reason not to make a follow-up collection.

"It was an attempt -- and a valiant one -- to make another album where there is no band," he said. "We just as well could have had some of the other guys' lawyers playing on the album, because we were in touch with them more than anybody else. We were stuck with the task of trying to make a Kiss album. There's your proof. You just can't do it on your own. And we had a producer who really didn't understand what we were about. That was the last time I was going to let that happen."