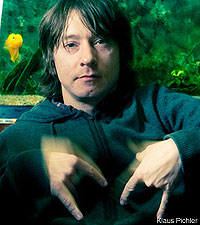 "Basically I spent my afternoon with three people that I like and made music. That's pretty much a winning combination in my book," Dahl told Noisecreep. The bassist also said he is currently working four session gigs and four side projects, including his plan for a solo electric bass project.

"As a freelance bass player, I have been playing with Malcolm Mooney (the original lead singer of Can). Also I recently laid down some bass tracks for Jason Cady's opera. This fall I will be doing some european festivals with Mateusz Walerian and Hamid Drake. Kevin [Shea] has hired me to play analog synth for his group for two concerts at the Kitchen on May 6 and 7."

On top of the above mentioned work, Dahl wants to put together a jazz group. In his search, he has jammed with Peter Evans and Mike Pride several times and then Weasel Walter and Travis Laplante on another occasion. Then there is American Liberty League -- which also includes Shea and David Buddin -- and Bayernwald -- which is the plan for a German-themed New Age project with Child Abuse frontman Luke Calzonetti and Gunter Janovsky.

"With all of this said Child Abuse is my number one focus right now," Dahl said.

His main band, Child Abuse plays Glasslands in Brooklyn, N.Y. on April 26. Their latest record 'Cut and Run' is out via Lovepump United on April 13.