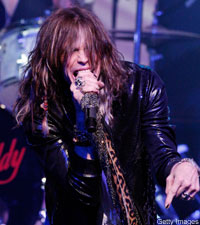 After months of rampant speculation that the band was on the verge of total collapse, it seems like Aerosmith frontman Steven Tyler's may soon be leaving the band. According to guitarist Joe Perry, Tyler has quit the band following their recent concerts in Abu Dhabi.

"Steven quit as far as I can tell," Perry explained. "I don't know any more than you do about it. I got off the plane two nights ago. I saw online that Steven said that he was going to leave the band. I don't know for how long, indefinitely or whatever. Other than that, I don't know."

Things have been fractious between the Bad Boys of Boston since the cancellation of the band's summer tour back on Aug. 5. The tour was nixed after Tyler fell from the stage at a concert in Sturgis, S.D., sustaining a broken shoulder and head and neck injuries. Soon after, Perry started hinting that Aerosmith's days were numbered, and that the studio sessions for the band's 15th LP had been pushed back indefinitely, after first being postponed last year.

"He's notorious for that," Perry said. "That's one thing I've learned to live with. I try to overlook it. I like to pick my battles. Frankly, the last few months I've been wanting not to rock the boat. I don't want him canceling any more gigs. We really wanted to do these last four. We just kind of didn't want to call him out or anything and get him anymore pissed off, for whatever reason. So we just let things lie. So we did the gigs and, like I said, I got off the plane and saw this online. That's how I know about it."

According to Perry, when he got back to Boston, Mass., he read online that Tyler was planning on leaving the band, and wanted to break out on his own and pursue other projects. Is that the same thing as saying "I quit?" No, but Perry thinks Steven is done. "He has had no contact with me or the other band members."

Regardless, Perry hopes to keep Aerosmith together. He's not sure what the future holds for Aerosmith, but the drama between Tyler and the rest of the band doesn't have him feeling very optimistic Tyler will be back.

"Right now, I'm adjusting to how we're going to go on," says Perry. "Aerosmith is such a powerful band, I mean it's like a steam locomotive. You just can't disregard 40 years of four guys who play together as well as they do. We're just trying to figure out what direction the band should take."

Filed Under: Aerosmith
Categories: News
Comments
Leave A Comment
Back To Top