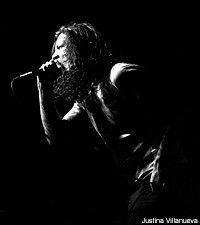 Just a year ago Trap Them released 'Seizures in Barren Praise' and shook up the lives of hardcore and grindcore lovers all over the universe. Like the three other road-crazed bands Trap Them played with at The Crazy Donkey Nov. 3 -- Toxic Holocaust, Skeletonwitch and Black Dahlia Murder -- they are always on tour, too.

Whether Trap Them are playing a basement (like when I saw them in New Brunswick this past winter) or a 600-capacity venue (like when they opened for Napalm Death at Gramercy Theater in April), they're playing from the darkest part of their metal hearts. And it's the kind of show I can see every night of the week.

"I just want to sit in the other room indian style and chill," the self-acclaimed anti-social frontman Ryan McKenney told the crowd as the rest of the band tried to settled their technical issues.

McKenney usually doesn't say much in between songs, because everything he needs to say is in his lyrics and aggressive stage work. Bassist Steve Lacour and guitarist Brian Izzi are always right behind him with heavy discordant -- part punk, part grind -- layers.

You can catch Trap Them again soon when they play a string of northeastern shows with Cave In and Narrows, including one at Brooklyn's new Knitting Factory on Nov. 19.

Trap Them Tour Dates
on TourTracker.com