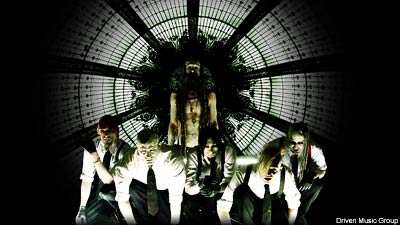 Crossbreed are one of those bands that doesn't know the meaning of the word 'quit.' It's not ironic that the band has linked up with Driven Music, the label owned and operated by Head, formerly of Korn.

"Head and Driven are great," vocalist James Breed told Noisecreep. "I first met Head and the other partners at this pimp hotel at Disney in [Orlando, Fla.] Head had his daughter with him and looked like he had a bigger purpose for life than in the past. One of the other partners, Mark Nawara, brought Crossbreed to Driven, which is crazy. They actually signed us based off our 'NSN' EP, which had no singles at all! But the offer came, and we started writing. Shortly after the signing, we came up with our first single, 'Hollow,' and followed that with the Stevie Wonder remake, 'Superstition.'"

Crossbreed endured a brief stint on Artemis in the earlier portion of the decade but the experience only strengthened the band. "[Guitarist] Roach and I have been in Crossbreed since day one," James said. "We felt we didn't get a fair shake the first time, so we figured if we stuck around long enough, a second chance would come for us to finish what we started. The music business is relentless, but it's something you have to work with. As we rebuilt our group into the current lineup, the evolution of our band was almost immediate. We felt stronger as a unit and the direction of our music has gone to the next level we were looking for. We had to take a step back before we could move forward."

One way the band moved forward was by using the recording money to open their own studio. "We can record whenever we want," James said. "At this rate, it should only take us four years to put an album out again!"

The new album, 'KE101' is an album that "defines Crossbreed," James said. "It has our traditional sounds and style, mixed with a new edge and better vocals overall. I have been the frontman the entire time, but even I wanted to grow as an artist. Surrounding myself with some really talented singers, the combination of Ian, Kem and I doing vocals has worked out for the best. We are unselfish artists that help each other and write parts for each other. 'KE101' has been the most fun I have ever had in a studio."

James is also a huge football fan, and loves the Tampa Bay Buccaneers. "They are gonna have a rough one this year, but I will always support them. I am also a huge Jim Rome fan. He is the man. Aside from that, I have no life. I write, record, play 'Madden.' Edsel from Dope is big into Madden, and I can't wait to play him." James also suggested that the powers-that-be should put a Crossbreed song on Madden 2011!