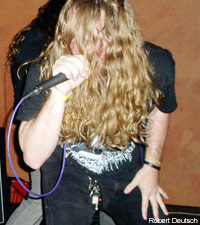 At the Blvd Cafe, its walls adorned with pictures of performances past, Los Angeles' the Funeral Pyre played their last show ... of 2009, amidst a swirl of beer and black metal. Along with Oakland's Embers, in town while on a brief Southwest-ish tour, the mistitled bar-turned-café-but-still-a-bar saw a good two hours of black metal and beer prior to the Funeral Pyre retreating into writing/recording mode.

"This is the final show for us for 2009, probably until mid-2010, actually," Funeral Pyre vocalist John Strachan told Noisecreep, before delving into details on the band's writing and recording plans. Fresh off a recent five-week tour that brought the band to the East Coast for the first time in three years, the Funeral Pyre will be retreating to their Southern California garages and practice spaces to finish writing what will be the band's fourth full-length -- it's about halfway done, according to Strachan -- before recording sometime later this winter with Landmine Marathon's Ryan Butler (Misery Index, Phobia).

The last show was reason enough for a small crowd to come see a set by the Funeral Pyre that included songs from the most recent record, Wounds (Prosthetic Records), and tracks from a recent split seven-inch (that on Strachan's Forest Moon Special Products label) -- including an arguably obscure cover by German hardcore act Acme. Opening was Embers' female-fronted ambient black metal mix of despair, keys, and continuous flow while supporting the band's latest album, the self-released 'Memoria In Aeterna.'

"As far as bands go, we try to stay pretty close ... and they're a great band," Strachan told Noisecreep of playing with the Oakland band prior to his own set. While the Funeral Pyre's temporarily bass-less lineup -- with re-joining guitarist Justin Garcia, Strachan, drummer Alex Hernandez and guitarist James Joyce -- played a brutal, if brief, set, they'll enter the studio with regular bassist Adam Campbell in tow later this fall at Ryan Butler's Arcane Digital Studios (Misery Index, Phobia) in Arizona.