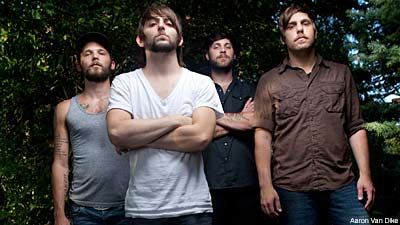 Inhale Exhale went out of their way to make 'Bury Me Alive' different than anything they had done previously. "We thought outside the box with it," guitarist and primary songwriter John LaRussa told Noisecreep. "We tried to not make it your typical, formulaic hardcore metal record. Each song has its own personality. We tried to hit people hard with the opening track, the song 'Rooms.' There's lot's of personality there. Track two is called 'Did You Ever Have A Touch To Lose?' and it is a hard-hitting song, one of the more technical songs on the album I guess.

"We tried to make each song have depth to it. Not just a heavy 'hit you in the face' song, but creative. We won't ever sacrifice that. 'Condemned' is one of our more melodic songs. A lot of melody, but a lot of intricate parts going on. We thought it was one of the more brutal but beautiful songs on the record, if that makes sense. All the songs practice the same goal though: energy and dynamics. We do have a 'ballad' on the record, but it's more of a trippy song with a hook. We tried to push the envelope as always."

'Bury Me Alive' is the first record that Inhale Exhale were able to enjoy, as well. "I think we actually took the time off to think about what we were writing and what we wanted to do," LaRussa said. "We love playing fast, aggressive music. We didn't just want to write what we thought we were supposed to write. It felt like being a kid again and being excited about a hook or a riff or a drum fill. At the same time, we're excited because we didn't sacrifice song structure or musicianship."

In addition to being a careful musician, LaRussa outed himself to Noisecreep as a serious comic book fan. "I've been into comics since the '80s," he said. "It started with Batman and GI Joe. I'm a huge Flash fan. Love it. I'd probably get a tattoo of it if it wasn't so cheesy. I think the Flash symbol would be dumb looking as a tattoo. At least by itself. I'm not crazy with it though. It has to be a writer I'm into nowadays."

Somewhat unsurprisingly, LaRussa is also a movie buff. "[Drummer] Gator and I are into horror films a lot, but Gator has seen more than I have. [Singer] Ryland [Raus] is into indie films a bunch. I started when I was a kid, learning about film and different directors. I love watching TMC and AMC. The classics are so good. It's history." LaRussa also said he digs bicycles and would like to take a tour of Italy through the Chianti Hills.