Michigan natives I See Stars exploded into the mainstream in 2011 after making their national television debut on the ABC late-night talk show Jimmy Kimmel Live! performing their songs "Glow" and "What it Means to Me." 2011 also found the sextet gracing the cover of Alternative Press magazine and acting as support on a tour of North America with Black Veil Brides.

As great as 2011 was for the band, 2012 has been I See Stars' most successful year yet with Digital Renegade, their third full-length album, flying off store shelves across the globe. The album was recorded with acclaimed producer Joey Sturgis (Asking Alexandria, Emmure) is the group's most accomplished work yet, with huge hooks around every corner.

I See Stars recently released a standalone single called "The Hardest Mistakes" which also features former Hey Monday vocalist Cassadee Pope and is available now on iTunes. The band is currently out on the 'The Thugs In Me Is You Tour' with Falling In Reverse, Enter Shikari (10/17-12/01), Letlive. (10/11-11/28) and Matt Toka (10/11-10/16).

Noisecreep recently chatted with I See Stars vocalist Devin Oliver and discussed his fascination with conspiracy theories, among other things.

It's going great. The record is doing awesome and we're finding ourselves wanting to replace old songs with new songs onstage because of how positive the reaction is. So we're really stoked about that.

You're touring during election season. Does the band get into politics?

The thing about everyone in my band is we are all very conspiracy driven which forces us to not be too into politics, because we all think it's a big joke. There's no sugarcoating it. We're paying more attention to the Detroit Tigers right now and them hopefully winning the World Series.

Talk about that – conspiracies - what do you guys think?

I could go on about this for hours. When it comes to the election, we're true to the fact that we feel that a win is already decided. We strongly feel that it is all planned out and very corrupt. That drives a lot of what we think – the corruption that we believe in and everything going on behind the curtain. We're very true to that. And we like to spread out that train of thought and let people know how we feel. As much as we want to spread awareness, we do think that going to show is also about forgetting about the real world so we try to be metaphorical about it and let the music deal with it so we don't have to get up and start making speeches.

So it's a basic distrust of organized society?

I feel like they are a lot of power hungry people out there, especially in office right now. It's just fishy; we do a lot of research on the Internet and try to keep ourselves as educated on as many things as possible. We're unable to watch the election coverage and take it seriously. Even if it wasn't pre-planned, people are so sunk into the ground about pulling for one aide or the other. They dig in on both sides and leave no room for other ideas. There' a lot to it I think that we will never really know about. But this band has a lot of strong beliefs. We are super conspiracy driven. We just don't trust the media or politicians.

What bands were you into growing up?

Are you familiar with Tom Delonge's web site, StrangeTimes.com, and his interest in conspiracies?

I know he's into it as well. What he does is amazing. And yeah, I just loved that band. I've been with my band since I was 13 and some of the earliest tunes we learned were blink songs. They helped my mind decide what path to take. Also Taking Back Sunday and Senses Fail. Chiodos was another band that had a big influence on me in Michigan. We saw them early with like 20 kids there, when they were called the Chiodos Brothers. Something about them was so emotional and deep and they helped me grow as an artist too. I'd say the coolest thing on Digital Renegade is how much we've upped our screaming – which gives it more impact – and that really goes back to what we grew up listening to, especially Chiodos. 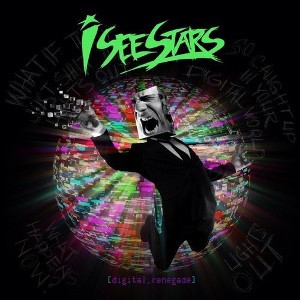 Digital Renegade is out now via Sumerian Records and is available on iTunes and Amazon. Catch I See Stars on 'The Thugs In Me Is You Tour' on the following dates: