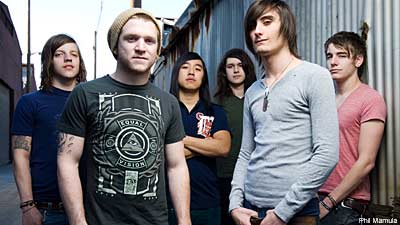 These days, there aren't many bands who embrace the 'screamo' tag. In fact, if you were to call most bands 'screamo,' they'd likely take offense. But according to guitarist Joshua Moore, who spoke to Noisecreep last week while driving through the desolation of Ohio, Michigan's We Came As Romans are, in fact, 'screamo.' But to be honest, it's hard to say just what We Came As Romans are, because the band's music incorporates samples, clean and growling vocals, orchestral sections, electronica elements and crushing, hardcore metal-inspired guitars.

They don't sound like any 'screamo' band you've heard, yet still insist on characterizing themselves as such. "We've had many band discussions about what genre of music we are and what we can really label ourselves as, but there isn't a whole lot out there," Moore insists. "You can't invent a genre for yourself and expect kids to know what it means. We took the 'screamo' tag because we do have a lot of singing and screaming at the same time. It definitely has a negative connotation, but we're pretty OK with it. We think it's fairly accurate."

We Came As Romans sound is a hodgepodge of styles, as evidenced on the band's new LP, 'To Plant a Seed,' which hits stores on Nov. 3. At times, you'd think you were listening to Underoath or the Devil Wears Prada, right before the music takes a turn towards the classical, and you'd swear you were listening to John Williams.

At other times, the music would remind one of early Killswitch Engage crossed with Horse the Band. Perhaps that's because of the wide variety of genres the band's members profess loyalty to. Some of the dudes in the band dig hip-hop, while other groove on country. Still others dig Slipknot and doom metal.

"Everybody listens to completely different genres," Moore reinforces. "You can name a band, and I bet you one person in my band listens to that band. Its really weird ... that the people in our band could come together to play the music that we do, considering all the different types of music we listen to."

We Came As Romans, who're wrapping up a tour with Oh, Sleeper and the Chariot, will be on the road for much of the coming year. Later this month, they'll head out with I See Stars, Of Mice & Men and Broadway. That tour kicks off Nov. 25 in Clemens, Mich., and runs through Dec. 19 in Grand Rapids, Mich.