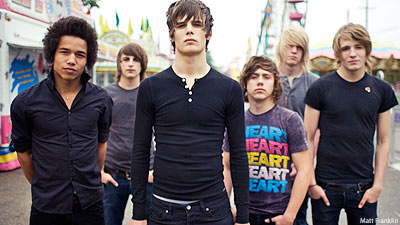 If I See Stars lead guitarist Brent Allen could only give a prospective listener one song, he would pass along '3D,' the title track of his band's debut album.

"I think the song is a good summary for the band as a whole," Allen told Noisecreep. "That is what the band sounds like." The Warren, Mich.-based screamo/electronica band wrote the lyrics with naiveté in mind.

"You can take it any different way," Allen said about the song. "But it has the album theme within it which is people being blinded by the media and not really understanding what's going on in their surroundings. That's one of the things we focused on throughout the album. I feel that that song is the song that represents us the best."

Filming the video for the song '3D,' which Noisecreep is premiering, was a hectic process. I See Stars sandwiched the shoot in between gigs. With one video under its collective belt, the band knew what to expect.

"We were treated very well by [director] Spence Nicholson and his crew. The only downside was the fact that we had a show the night before, and we had to be at the video shoot at 7 in the morning to be ready to shoot. We had a show that day, too, that we had to take off to. Overall, it was a fun experience. It was a very professional experience. Obviously getting up ridiculously early and doing that all day long was a little bit of a task. But like I said, it was a very enjoyable task."

Even though I See Stars only released the album '3D' in April, the band is preparing for its sophomore effort.

"We have a couple of songs now," Allen said. "What we do is we'll go in and record parts and start piecing it together. Basically, we'll write the song and then record it at the same time. So we probably have a couple songs already down that we're discussing being on the next record that's hopefully coming out summer of next year."

Filed Under: I See Stars, ISeeStars
Categories: Exclusive, Videos
Comments
Leave A Comment
Back To Top