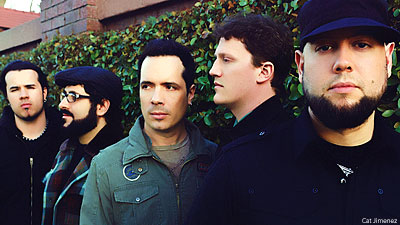 The world is not coming to an end before June 30, the day of Hypnogaja's latest album release, 'Truth Decay,' assures its keyboardist Mark Nubar Donikian. The 14-track recording centers on the "world's dramatic, apocalyptic end and how life cycles into new chapters, sometimes with sudden force" reads the capsule comment on the California band's website.

"We're comic book nerds and sci-fi nerds," Donikian admits to Noisecreep. "We have the whole science fiction b-plot that's going on that's not inherent in the lyrics, but is inherent with the cover art. We talked with an illustrator about our concept for the album. There's this scientist and spaceman and a love story intertwined in there. The characters in our songs are time- traveling and there's all this doom 'n' gloom and then there's this whole apocalyptic thing happening."

The song "Worship Me (I'm On TV)" is about pop culture today. How does this fit into the apocalypse, you ask?

Download the "Worship Me (I'm On TV)" MP3 (right click, save as)
"It's about not only is everybody wanting their 15 minutes of fame, but they feel like they're owed 15 minutes, instead of it being a dream," says Donikian.

"The concept of the song is basically the end of the world could be happening outside the window and nobody has even bothered to notice because they're so engrossed in their favorite reality show. And I'm guilty. I watch reality shows, too. It's just a comment on where I think the zeitgeist is at with everybody really engrossed in their own favorite portion of reality stuff."

When Donikian looks at the state of the world today, of course he does feel there are other indicators of the apocalypse, besides 'The Bachelor,' 'Wife Swap,' 'Survivor' and the like. "The music that we wrote this time reflects how we feel about the world either on a real level or on a perceived level," he says. "There are times when you go, 'Oh my god, the world is ending.' There are times when you look at this temperature change that's happening, look at the ignorance that goes on with some of the issues where stuff needs to be done in order for us to be able remain healthy and living here as a species, as a people, and you go, 'If the right combination of wrong decisions are made, it could be bad for everyone.

"So the real answer is yes. It will probably take a very long time for something really big and bad. It's probably going to be an accumulative effect. On the album, we just accelerated that process. That's where the sci-fi part comes in. In a way, it's all very 'Blair Witch (Project).'"

As excited as Donikian is to talk about the 'Truth Decay's' premise, he says his bandmates were equally onboard and behind the storyline that emerged about halfway through the making of the album. Singer/songwriter Jason "Shy Boy" Arnold writes the majority of the lyrics with long-time collaborator and outside songwriter Dr. John Scott Mulchaey, a research astronomer by profession. Guitarist Jean-Yves "Jeeve" Ducornet and Donikian write the music, and Donikian also works with Arnold on the melodies, says Donikian. The rhythm section is drummer/percussionist Adrian Barnardo and newly added bassist Bryan Farrar.

"We're rock/hard rock/alternative, however you want to categorize it," Donikian says. "Our last record [2005's 'Below Sunset'] was a lot heavier and this time, I personally wanted to bring in some influences like Queen and Blondie and things from the 70s and 80s that are really cool, like the stuff Giorgio Moroder did with Blondie was really great, so we incorporated some of those synths, like in 'Worship Me.' We just started doing musical pieces that we all felt went together and when we started writing lyrics, we were like, 'Ok, we want to do a conceptual thing. What are we gonna write about?'

"We knew it would be 'the end of the world' thing, but we didn't want it to be all gloom 'n' doom. We wanted there to be a ray of light because you're so deep into your work as a writer that you need to have some hope yourself, not necessarily for other people - but I want other people to have that too. But I didn't want to have a dark ending."

Check out the album after June 30 to figure out how it ends, and download "Worship Me (I'm On TV)" in the meantime.