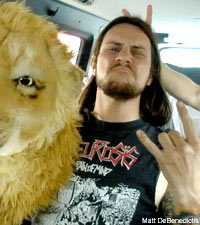 There are two items that must be noted about Hull's van. First, they have a license plate that has 'The End' on it, which just so happens to be label the band is on. "It just came that way," guitarist Drew Mack swore to Noisecreep when they let us prod and explore their vehicle.

Second, these fine doom metallars may quite possibly have the tidiest van ever, aside from the blankets strewn about, but those don't count -- those are the throw pillows all vans have.

One reason the band keeps the van so clean -- and this goes for the pristine outside of their van, too -- is to not make it look like it's a tour van that could have valuables in it for stealing. "Most bands try to f--- their van up and put stickers on it, and that's a prime target," guitarist Nick Palmirotto says. At one point, the band debated about getting the name of a central Baptist church on the side just to deter any more eyeing thieves.

The band of course has rules that keep the inside so clean. "No Smoking," the full band said in a drill like unison when asked what the number one rule in the van was. "Or other materials ..." third guitarist Carmine Laietta laughs. But with no long draws on smokes to pass the time, the band is left to do other things on the time-consuming drives. "Sleep and look at boobs on my iPhone," says drummer Jeff Stieber.

"That's a big part of it," added Laietta. But truth be told, he does much more than merely kill time on the long drives. "I put together a rough video of Batillus. We got a really good soundboard recording of one of our shows, and I have a little camera that takes internet 640 by 480 video, and I was in here throwing together a video for them, kind of. I am hoping to get more footage of them, but the light ..." Laietta commented in frustration. "They always play in the really really dark, so it's hard."

At time of interview Hull was in the middle of The Beard Destroyer Tour, alongside Battilus and Salome. Nearly every show had some sort of local act, or someone playing that the members of Hull hadn't heard yet, which hearing bands fresh to them is something they all love about being on the road. "We try to get CDs from all the bands we play with. We usually listen to those albums all the time and friend's bands and stuff," Palmirotto said. "A lot of what we listen to is bands that we meet," Mack added. "We've definitely been surprised by all the bands we've played with so far. The bands we didn't even know about were f---ing awesome."

For the band, two items were declared with the title of 'can't leave home without them.' The GPS, which Palmirotto called "God," and that makes sense, since he is the newly sober band member and the late night driver; and the tour mascot Mortimer is always a part of things. "Me and Nick went into this one truck stop, and we just saw him," Stieber recalls of how they got Mortimer. "We just started cracking the f--- up, and Nick decided to buy him, and we've had him ever since."

"We love truck stops," Mack confessed. "And we try and stop at as many as possible and pick up the worst s---." And from some back region of the van someone yelled, "the best s---!"