If you put on Heaven & Earth's upcoming Dig album on your turntable and asked someone to guess what year it came out, they'd probably say somewhere between 1972 and 1979. It's no surprise since the group cite classic rock icons Deep Purple and Bad Company as musical and spiritual influences.

Founded by British guitarist Stuart Smith, Heaven & Earth is rounded out by bassist Chuck Wright (Quiet Riot, House of Lords), singer Joe Retta (The Sweet), drummer Richie Onori (The Sweet) and keyboardist Arlan Schierbaum (Joe Bonamassa). Dig, their third studio album, was produced by Dave Jenkins, a man who's turned the knobs for everyone from Metallica to R&B vets Tower of Power. The album features guest performances from Howard Leese (Heart), Richie Sambora and David Paich (Toto) and will hit stores on April 23.

Today, Noisecreep is bringing you an exclusive video showcasing Heaven & Earth and their upcoming album. 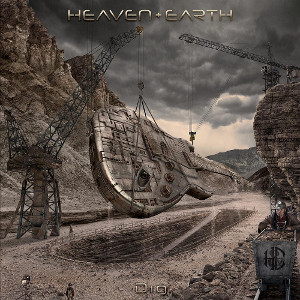 The track listing for Dig:

7. Waiting for the End of The World