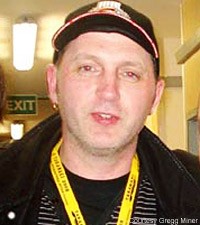 Internationally renowned English-born metal and rock journalist Garry Sharpe-Young died on Friday May 12 at his home in Taranaki, New Zealand after suffering an aneurysm. He was 45.

Sharpe-Young wrote over 20 books, including the 2007 reference manual 'Metal: The Definitive Guide' which featured a forward by Judas Priest frontman Rob Halford, the 2007 thrash encyclopedia 'Thrash Metal' and the unauthorized biographies 'Sabbath Bloody Sabbath: The Battle For Black Sabbath,' and 'Ozzy Osbourne: The Story of the Ozzy Ozbourne Band.'

In addition to being a prolific writer, Sharpe-Young served in Taranaki as the events business development manager at the New Plymouth District Council. There, he helped revolutionize Taranaki as a leading events center in New Zealand, securing major events for the district, including performances by Motorhead, Fleetwood Mac and Sir Elton John.

"I will miss his huge knowledge of music and friendship," wrote Andrew McNeise on the MelodicRock.com Noticeboard. "He was always keen to chat on the high days of the NWOBHM and metal in general. His prolific writing will stand as an ever lasting memory to him. His writing style was heartfelt and you always knew the passion he had for the subject when reading his books."

Sharpe-Young started out in the music industry at age 14 when he was doing art work for album covers, including Grim Reaper's 'See You In Hell' and Queensryche's 'Rage For Order.' Soon after, he decided writing about music was his true calling and began working for the fanzine 'Metal Mania,' owned by famed San Francisco DJ Ron Quintana. Sharpe-Young went on to write for 'Aardschok America' then spent seven years working for 'Metal Forces.' He also worked with various records labels as an A&R man signing new talent. The Englishman moved to Taranaki eight years ago with his wife and three children.

Our heartfelt condolences go out to Sharpe-Young's family and friends.