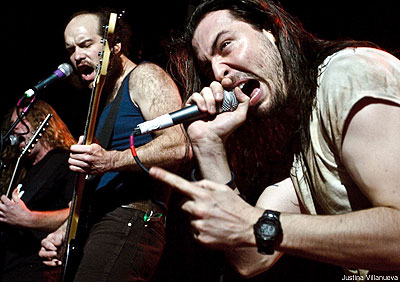 "We want fun! We want fun!" Andrew W.K. fans shouted on March 16 at New York City's Irving Plaza. At this point, the show had barely started. Andrew W.K. was still back stage preparing for the first show he would play with his full band after a five year hiatus.

For anyone who has never been to an AW.K. show there is one thing you are guaranteed and one thing only. And that thing is FUN. Over the years many people told me that but I didn't believe them until I saw it with my own eyes when the band got on stage at about 10 PM Tuesday night. It was at that point when everyone on the dance floor jumped up and down and -- in true W.K. style -- partied hard. There was crowd surfing. There were fists shaking in the air. And there was lots of lyric screaming. Even if you never gave a damn about partying, it's pretty unavoidable at a W.K. show.

"There's nothing that means more to me than having a hometown with friends," Andrew W.K. said after telling the packed venue that he considers big apple his home.

AW.K.'s music might be closer to pop punk then brutal death metal, but that didn't stop Decibel Magazine from putting 2001's 'I Get Wet' in their top 30 metal albums of the decade. It's just that contagious of a record.

'Close Calls With Brick Walls/Mother of Mankind' will be released on March 23. You can also catch the band at this year's Warped Tour.