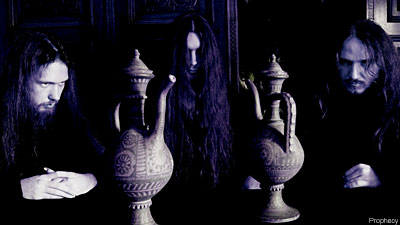 Is black metal extra evil when it comes from Transylvania, like the long-running Negura Bunget? Turns out the answer is no! While black metal is known for its connection with Satan, fog, mist, snow-covered branches and corpse paint, it's about a feeling -- not an image.

"In the end, it counts less where you came from," drummer/percussionist Negru told Noisecreep. "What counts the most is the spirit you carry with you. That spirit is of course influenced by the place you came from and by your relation with it. Black metal is for us a spiritual travel."

Now that we've cleared that up, Negru was happy to remind us that Transylvania, despite its nefarious reputation in pop culture for its association with Dracula, is a placed steeped in folklore, yet doesn't produce that many black metal bands! "There's a lot about Transilvanians most people don't know," he said. "I'm always fascinated with the relation between the two worlds: the world of the living and world of the dead in the local traditions and folklore.

"It is believed that in one certain moment, the gates between the two worlds open, and then many ceremonials take place, to somehow protect the community against the harms of the dead. The whole local traditional calendar can be seen as a collection of moments that favor certain activities, forbid others, all with the same purpose of serving the interests of the community. Everything was gathered in time and by experience and it's amazing to still be around things whose meanings get so much back in time."

Negura Bunget are currently prepping to release two new pieces of material. "'Maiestrit' is a re-interpretation of our older 'Maiastru Sfetnic' album," Negru said, referencing their 2000-released album. They are also working on a new album, called 'Vîrstele PÄƒmîntului.' Negru said the new material is "about places of the earth and places of the spirit, about bounds transcending worlds." The band went into seclusion and retreated into the wilderness of the mountains to work on the album, in order to concentrated solely on their efforts! "It will be released by Code666 Records in a limited edition, handmade wood box, roped and filled with the very earth of the place it comes from," Negru said. The band will sell the limited edition when they tour Europe in March.

For those who are wondering, the name 'Negura Bunget' doesn't refer to a person, but a presence. "It is a powerful dark presence of an intense nature, connected with the local nature and with its spirit, ascending and descending, shaping through the clouds of the present," Negru said. "You can sometimes feel it is there, but you cannot grab it. Only your clean mind and soul can came close of its presence. From the very beginning, we shaped ourselves into relating with it, so that is now part of us."