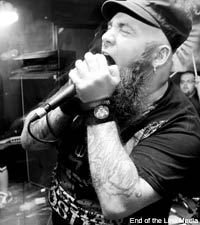 It's been a hell of a year for Full Blown Chaos singer Ray Mazzola, but Mazzola and his band have taken the loss they've experienced and parlayed it into their new music. "When you lose someone, the flurry of emotions you go through can be extremely volatile," Mazzola told Noisecreep. "I became a powder keg after my parents passed away. Anything and everything would set me off. The only way I was able to diffuse my anger was to write.

"I literally have over 100 notebooks from the past year alone. In the past six months, I've lost several friends to suicide or drug overdose, and every time I think of how I will never be able to talk to that person or have them be a part of my life, it enrages me. The only way I release this fury and achieve any solace is through writing and singing."

It's weighty stuff for a straightforwardly moshy band like FBC, but Mazzola is pouring every ounce of pain into the band's next album. He also said that "performing used to be about entertaining others and helping everyone release their tension and frustration like I had, going to shows when I was younger. Now, it's my only means of safely releasing everything that is boiling inside of me."

Music is every bit the same salve for the composer and Mazzola is just happy to get things off his chest. "Everyone suffers from loss, and with this new album, everyone will be able to relate with the emotions felt," he said. "We will pay homage to our favorite miscreants and malefic entities through our music to help purge the negativity from ourselves. This record is going to hit harder than the Death Star." The current working title of this cathartic opus is 'Villains.'

'Villains' -- or whatever it will be called -- will not be released by Ferret, the band's former label. Mazzola said, "We've filled our contractual obligations and are seeing what is next on the horizon. We love Ferret, and it's going to be difficult to find a label that can match their abilities."

A new label isn't the only change in the FBC realm. They're adding a second guitarist because "we have wanted to expand our songwriting. It was only a matter of time until we upgraded. Having lead and rhythm guitars now allows us to further the depth of our writing. Having another brain contributing to the creative process adds more fuel to the fire. [Guitarist Mike Facci] is a destructive songwriter. Adding [guitarist Mark Gumbrecht] to the mix has increased our potential and made the band heavier and meaner."

The ever-busy Mazzola is also an ordained reverend for the same reasons he partakes in music. "I became a reverend to help others and to further my own faith," he revealed. "To give counsel and be the best person I can possibly be. After the Sept. 11 tragedy, there were many friends of mine within the community that were affected and had no one to talk to. I became ordained to legally become a proper advocate.

"Being a New Yorker, I felt it was also part of my duty. I helped many police officers and firefighters with what they were going through and helped a lot of children handle the fears that became a part of living in N.Y.C. at that time. I mainly keep to myself about my faith, but I will always take time out to talk with anyone that wants to talk."