So, a stage prop breaks your nose and knocks you on your a-- on national television. What do you do? Try to glean as much press from the incident as you can, while people still care. That seems to be Poison frontman Bret Michaels' agenda this week. With talk of an official statement from the "Rock of Love" protagonist coming later this week, Bret's camp's issued a statement on the matter, and even Twisted Sister frontman Dee Snider's jumping on the publicity bandwagon, going on the defensive, and saying he had nothing to do with the incident. Noisecreep isn't above going after that online traffic, so, we'll keep bringing you all the latest on Bretgate for as long as the story's maintaining momentum. It's a shameless installment of White Noise, and it starts now. 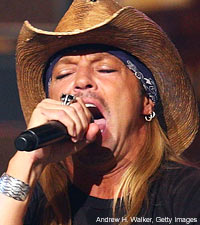 + Representatives for Bret Michaels have issued a statement on Poison's Tony Awards appearance, and this mishap that rearranged Bret's face. The statement criticizes the show's producers, for not halting the stage prop's descent even after it clipped Michaels, and that "witnesses state the singer moved himself out of the way just moments before the prop touched down." The statement continues, saying "somewhere down the line, there was a lack of communication and the prop should have been immediately halted until Michaels was clear. Sunday morning at rehearsals, Bret was never informed that the descending set piece existed, let alone would be moving into position as he was exiting the stage." His reps blasted the show's spokesperson for brushing "off this incident with a comment stating, 'Mr. Michaels missed his mark,' with no mention of concern for his condition. If everyone at the Tonys were aware that Bret missed his mark, then they should have been aware enough to stop the set piece from hitting him or at least slowed it down until he cleared the stage."

The statement then takes aim at show host Neil Patrick Harris, for making light of the situation "without having any knowledge of the severity of Bret's injuries." We smell a lawsuit. Meanwhile, Twisted Sister frontman Dee Snider says rumors he was in some way involved with the incident are not true, and the fact that Dee was seen in the rigging area at the Tonys, minutes prior to the incident, means nothing. "Dee wishes Bret a speedy recovery," the statement concludes.

+ The forthcoming "Guitar Hero: Van Halen" game was unveiled last week at E3, and some noticed right away that founding bassist Michael Anthony and onetime frontman Sammy Hagar were missing as avatars in the game. Instead, only David Lee Roth and Anthony's replacement, Wolfgang Van Halen, will appear in the game alongside Eddie and Alex Van Halen. That really bothers us.

+ Play bass? If you answered "Yes," then perhaps you should try out for 3 Inches of Blood. There are some catches: You have to be Canadian, with no criminal record and a valid passport. Contact the band via it's MySpace page to inquire about upcoming auditions. Meanwhile, Full Blown Chaos is also looking for a new bassist between the ages of 21 and 35 who're able to practice in New York City and own tour-ready gear.

+ Belphegor have set 'Walpurgis Rites - Hexenwahn' as the title of their forthcoming studio album, which will hit stores in October. "The title fits perfect to the whole concept, the lyrical themes," says frontman Helmuth. "I have always been fascinated by the idea and atmosphere surrounding witches, their magic, the insane Sabbath/ceremonies - and all the obscurity that goes with it. With the nine sound collages, the verses, artwork we continue our descent into the depths of musical hell."

+ Congrats to our pals in Iwrestledabearonce. They'll be heading overseas to tour with Architects, Despised Icon, Horse the Band, As Blood Runs Black, Oceano, and the Ghost Inside, for the "Never Say Die!" tour. It starts in October, and crisscrosses Europe through the end of November.

+ The Red Chord has finished tracking its new album, which will be called 'Fed Through the Teeth Machine.' A fall release is planned.

+ With just one week to go, the Blackendfest has lost all of its support acts, leaving headliners Mayhem to finish things off. Before the tour's launch, Marduk were prohibited from entering the country, and withdrew. Then, Withered was forced to drop off as a result of transportation issues. Now, Cattle Decapitation and Cephalic Carnage have also pulled out, for undisclosed reasons.