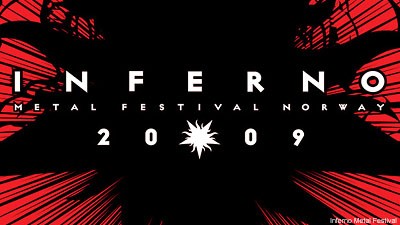 FESTIVAL UPDATE: Norway's infamous Inferno Metal Festival has finalized the lineup for its 2009 edition. As usual, it's STACKED - we've got Carpathian Forest, Paradise Lost, Keep of Kalessin, Kampfar, Helheim, Koldbrann, Negura Bunget, Root, Vreid, and tons of others. The festival will take place between April 8 and 11 in Oslo, Norway. Not to be outdone, the good ol' US of A has something equally awesome on the horizon. Chicago, IL will be host to the first-ever Machitehew Assembly, a black metal / experimental / noise festival that is slated to go down from June 5-6. Confirmed acts include Marblebog, Bone Awl, Velnias, Bloodyminded, Burial Hex, Cadaver in Drag, and many more. Start booking your plane tickets now!

BUY THIS: USBM legends Krieg have just released a split 7" with experimental black metallers Caina (Profound Lore) on green (limited) and black wax. The split is available from the Grief Foundation, and is looking to be a must-have for fans of raw, primal black metal. Also, Krieg recently announced plans for an official live DVD, which is now available and features three live shows filmed in Chicago, San Antonio, and Hungary. On a side note, make sure to pick up 'The Malediction Fields,' the new album from the UK's insanely awesome atmospheric black metal troupe Fen (out now on Code 666/Aural Music). Seriously, this band rules.

COMING SOON: A new slab of Jesus-hatin' brutality from Texan black metal tryants Kult ov Azazel, 'Destroying The Sacred,' is due out June 2. We've also got new albums from Old Wainds, The Green Evening Requiem, Dodsferd, Razor of Occam, and Ruins to look forward to, and - holy sh*t, there's a new Archgoat CD coming out?! My day has been made.