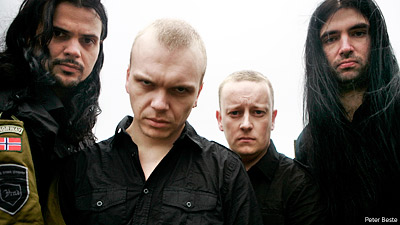 Norwegian back metal has gained much attention as a serious sonic form and artistic endeavor in the U.S., but there are still many releases that do not find their way onto U.S. shores. To help remedy that, The End Records in conjunction with Indie Recordings have signed a distribution deal that will be bringing some notable black metal releases, including Vreid (members of Windir), 'Engangsgrill' (Nattefrost/Fenriz) and Sarke (Nocturno Culto from Dark Throne), onto U.S. soil starting later this month.

Hváll and Jarle of Norway's Vreid tell Noisecreep, "We are very pleased with the fact that 'Milorg' will get a US release in October, the album has been out in Europe since January, and the response has been fantastic." Among the fantastic response is Metal Sucks, who said of the album, "'Milorg' might just be the most proudly Norwegian album you will ever hear." Explaining further that "Vreid's style shifts between dramatic blast beats and 'black and roll' head-nodding grooves that are cemented together with the folk–metal melodies."

The other releases The End and Indie Recordings will be distributing is 'Engangsgrill' -- a split album from two icons of black metal: Fenriz of Darkthrone and Nattefrost of Carpathian Forest, who have teamed up to explore the fine line between black metal and classic rock. Also, the debut album of Sarke, whose namesake has been involved in Khold, Tulus and Old Man's Child (amongst other projects) and also includes Nocturno Culto of Darkthrone.

Their first album, 'Varunah,' was released to an overwhelming reception in Europe this past April and is an homage to legendary metal bands like Mayhem, Celtic Frost, Death, Motörhead and Kreator, and was recorded in the '70s style to get across a vintage feel.

Hváll and Jarle of Vreid further explain their excitement to Noisecreep saying, "We have high hopes for the release," and give us insight to their forthcoming plans, stating, "We are now ready to set sails and head west for the four weeks Heathenfest Tour in U.S and Canada. This will be our first full tour in North America, and we are eager as hell to play for our loyal fans over there, and hopefully gain many new ones as well."