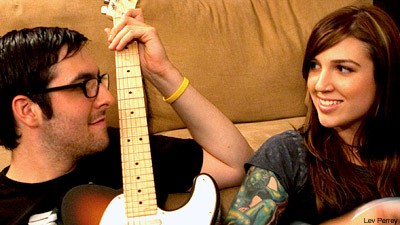 Light This City were one of the more promising young bands the American metal circuit has produced in the last few years. That's why when the San Francisco quintet announced their sudden break up last year, the underground community let out a collective gasp. What made the news even harder to take was that Light This City were just about to release their strongest effort yet in the shape of 'Stormchaser.'

Recently, news came out that Ben Murray and Laura Nichol, the former drummer and vocalist of LTC respectively, had started a new project called Heartsounds. People expecting the same kind of death/thrash hybrid of their last band will be in for a surprise when they hear the new material. Heartsounds is a much more melodic and hardcore punk-influenced affair. It shares much in common with the West Coast thrust of bands that record for the Fat Wreck Chords and Epitaph. They will be releasing their debut album, 'Until We Surrender,' on August 25 through Creator Destructor Records.

In this Noisecreep exclusive, Murray and Nichol talk about their new project for the very first time.

Before we get into talking about the new project, I have to ask you what happened with Light This City. It seemed like the breakup came out of nowhere.

People definitely weren't expecting the breakup, but Laura and I had been feeling burnt out and unhappy with the band for a while. Touring full-time 10 months a year and spending every night sharing the stage with bands we didn't feel connected to musically anymore was really bumming us out. After all, the band was our entire lives, and definitely consumed every second of every day for me. Musically, Laura and I have always been into punk rock, and I started to really dislike the attitudes of bands in the metal scene and how they viewed musicianship, as well as their careers and the real quality of their output. It seemed like a nonstop contest, and I felt like very few bands still cared about writing actual good SONGS. The politics of being in a full-time touring band also really bothered us as we spent more time on the road. We missed the innocence and fun of being in a band purely to concentrate on the music, and to not have to worry about any other factors relating to business, etc.

Musically speaking, Heartsounds is a big change from Light This City. Where LTC was steeped in the European death metal and Bay Area thrash sound, this new project is coming from a melodic hardcore standpoint. Were you and Laura always into this kind of style or did you get into it more recently?

I wouldn't say Heartsounds is coming from a melodic hardcore standpoint, but more of a melodic punk standpoint. Bands like Strung Out and Bad Religion have always been favorites of ours, ever since we were really young. We have loved metal for a long time, but we never stopped listening to fast and melodic punk rock. This band was a natural progression (or regression depending on which way you look at it) in a direction we felt was really refreshing and fun to play: key word being 'fun.' Writing this album was an amazingly enjoyable process, and playing these songs is even better. The whole project was approached in a completely different way than Light This City. With Light This City, we wanted to take over the world. We quickly realized that wasn't really possible, even though we did all right. This band is a return to the real reasons Laura and I started Light This City, which was because we love writing songs together and seeing them take shape into something really special.

Which bands did you use as a touchstone to what you wanted to reach musically with Heartsounds?

That's an awesome question, and I love when musicians talk about their favorite bands/artists. Musically, I really wanted to write interesting and somewhat complex songs that still had the hooks and simplicity of a great pop song. One of my absolute favorite bands is Propagandhi, and I really admire how they can combine punk rock melody and values/politics with more metallic musicianship and aggression. Coming from a background of melodic death metal for the last six years, I felt it was an easy transition into injecting fun riffs and mild complexity and speed into these songs. Personal favorite bands/musicians for me are Bruce Springsteen, Bad Religion, In Flames, Strung Out, A Wilhelm Scream, etc. I feel like all those show through, even the In Flames, being that there are still guitar harmonies like in Light This City. I know Laura loves all of the same stuff, but we both listen to many different kinds of music that I feel it all contributes, whether it is doom/black metal or pop-punk. Regardless, this record has a great mix of mid-tempo and fast songs, so I feel like both metal and punk fans will be able to appreciate it.

Ben, you played drums in Light This City but you actually tracked the guitars, bass and vocals for the upcoming Heartsounds album. Have you always played these other instruments and how tough was it getting your vocals to where you wanted them?

I have always played guitar and drums, since I was 12 years old. I actually started playing guitar before picking up the drums. That being said, the music was really relaxing and easy for me to get done, and I wrote all the music for the record. Laura also tracked the guitars alongside myself and she absolutely killed it! I am so proud of her progress with her guitar playing since LTC called it quits. As for my vocals, I was really nervous in the months leading up to the recording, but as usual with every recording process I've taken part in, I practiced my ass off! Laura and I worked on our harmonies and vocal tones to death, and I feel like the outcome is pretty rad. We have always loved male/female dynamics in vocals, and her tones contrast pretty nicely with mine. Female vocalists have always been a favorite of mine to listen to, whether I'm rocking out to some Pat Benatar, Paramore, Made Out of Babies, Tegan and Sara, etc. It all rules!

Laura, your vocals for Light This City were extreme, but on the stuff we've heard on Heartsound's MySpace page, you actually sing melodically. Does doing a project like this fulfill something you've wanted to do artistically for a long time? It seems like the music is open for you to really go in there and let loose.

It completely does. I remember being 15, borrowing Ben's guitar, and playing Distillers songs, and listening to Strung Out. Then a couple of years later, right after I got into The Black Dahlia Murder, Trevor from BDM told me about this band A Wilhelm Scream. And I've been really hooked on punk ever since. I love the feeling of just being able to sing along to great melodies. Screaming lets you get emotions out there for sure, but there's something about putting what you're feeling into a killer melody that is incomparable. I definitely felt like I knew exactly what I was doing more with Light This City, but that's what so exciting about Heartsounds; I don't know the full limits of what I can do yet.

Your debut album, 'Until We Surrender,' comes out in August, so do you plan on getting a complete lineup together and touring at all?

One of my best friends Steven, from the Bay Area punk band Comadre will play bass for us live, and I am in talks with a few drummers for live shows. As for touring, I don't see it happening in the foreseeable future given that I just finished my first year at UC Berkeley, and Laura is finishing her second two at UC Santa Cruz. Plus, we are still in debt and burnt out from touring with LTC, so we are just going to stick to really fun Bay Area and California shows. If great opportunities come our way for the summers or breaks though, we will definitely hop on them, assuming it all worked out!

Can we expect either of you to do something in metal again? Do you have any other projects coming in the near future?

If Ben and I had the opportunity to put a Light This City show together again, we would do it in a second. Neither of us feel like we really got closure on 'Stormchaser' because we only played one song off that album twice at live shows. I doubt we'd do another LTC tour, but you never know. As for projects, we really wanna get the most out of Heartsounds and play some live shows and write and record more stuff for it in the future. And I know a few people/bands that I'll probably do guest vocals for, metal-wise and punk-wise, so just keep your ears open!