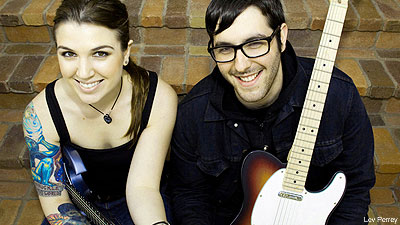 Killer Lyrics: And we will sit here and confront all our fears / Through the songs we've been meant to sing for years / And nothing can hurt us now

Heartsounds' 'Our Last Hope,' from their Epitaph debut 'Until We Surrender' is a little more positive than a lot of the songs covered on Killer Song Lyrics. But behind every positive message is a darker side. "I wrote that song's music and lyrics," guitarist and vocalist Ben Murray told Noisecreep. "And I really see it as the 'anthem' to the record, considering it is about feeling hopeless, with nothing left to cling to besides the music that you write."

It helps to know part of the history of the band members to really understand Murray's situation. He and Laura Nichols, the other guitarist and vocalist, were also in the thrashy Light This City. Although Light This City were decidedly more metal, there are remnants of their former band in Heartsounds' powerful pop punk sound, as heard in their machine gun guitar picking and double-time tempos.

Murray's and Nichols' time in Light This City certainly gave them a certain degree of experience from which they can draw proper perspective. "In the song, I talk about the connection to music that I have felt for years, and how it really has saved me during awful times," Murray explained. "I thought it was a cool idea to have the back-and-forth vocals with Laura kind of speak for our friendship that has lasted about nine years now. It is about how we have both experienced some really great and terrible things, but through it all we have had our band to hold dear to us, whether it was Light This City or Heartsounds."

"I basically see the song as more uplifting, even though some of the lyrical content is a tad bit downtrodden," Murray said. "It is the last track on the record, and I feel it is somewhat hopeful of at least having something in life that we can always rely on, which in our case, is music."

Heartsounds are touring through July to support 'Until We Surrender.'