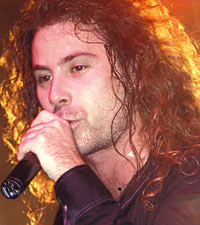 Since vocalist Dan Nelson was unceremoniously fired from Anthrax this summer and ex-Anthrax singer John Bush (from 1992 to 2005) was re-enlisted to play the Sonisphere Festival in August with his former band, fans and media have been gunning for Bush to be officially reinstated. But few would have guessed even Nelson is on Team Bush.

In a recent interview, Nelson states, "Look, I'm not at all bitter, and I hold no grudges. It's their band and they have a right to do whatever they want. I genuinely wish them nothing but success. They're family men who made a career decision, and I hope Anthrax gone on to great things. I feel what they now have to do is get back with John Bush -- it's the best option for them."

And although Scott Ian said earlier this summer, "I love working with John, and I know I speak for everyone involved with Anthrax -- the band and the fans -- when I say that the best thing for us would for this to turn into a long-term relationship," no official statements confirming or denying John Bush's current status with the band have been released.

But adding more fuel to the unanimous speculation of Bush's future involvement is Anthrax's announcement on Monday to play Australia's Soundwave Festival next February. The band's photo on the festival site features a shot of them at Sonisphere with John Bush and this blurb: "Due to the overwhelming fan response following John Bush's performance, a 'Bring Back Bush' campaign was set up and subsequently endorsed by Scott Ian. It is with great excitement that we can confirm these New York thrash titans will be gracing the stage at SOUNDWAVE 2010."

Filed Under: Anthrax
Categories: News
Comments
Leave A Comment
Back To Top