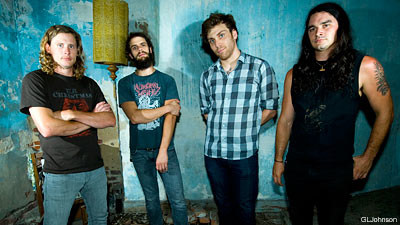 While they were ensconced in the studio working on the follow-up to their critically acclaimed 'Red Album,' Baroness guitarist/vocalist John Baizley and guitarist Peter Adams spent weeks searching their souls, painstakingly tearing apart every single riff of every single song to make sure they interlocked perfectly with whatever came before and after, and articulately expressed the range of emotions the musicians wanted to convey.

Then, the duo assembled a variety of alternate possibilities -- just in case. Even after the songs for 'Blue Record' were recorded, Baizley wasn't able to relax. There was still the mastering to oversee and the album art to complete

"This record has become a huge undertaking that has taken on a life of its own and legs of its own," Baizley tells Noisecreep. "It's almost gotten to the point where I can't see it for what it is because I'm so deeply immersed in it and I've worked so hard on it. But the mantra of this band, if we have one, is that it has to be difficult. It has to be, because if there's no challenge and if it's smooth, essentially we're just repeating ourselves and operating in our comfort zone, and we don't believe in comfort zones."

The endless hours of trial and error, stress and fatigue paid off. 'Blue Record' is dense, yet unencumbered, immaculately crafted but far from conventional. Songs like 'O'er Hell and Hide' and 'The Sweetest Curse' are expansive and dizzying, layered and angular, yet interlaced with memorable vocals and impeccable guitar hooks.

"One thing we tried to do that we've never spent any time in the past doing is writing within the confines of a typical song structure," says Baizley. "There are actually songs that have a verse and a chorus on them, which is very, very atypical for us."

Like Mastodon and Kylesa, Baroness' brand of psychedelia is driven by the mood of the moment and colored by the personal and interpersonal experiences of the musicians who created it. Some of 'Blue Record' is crushing and colossal, other parts are airy and incandescent.

"I think this album is heavier in a different way and lighter in a different way," Baizley says. "There are parts that are angrier, more aggressive and more brutal than 'Red Record,' but there are also moments that are way lighter and way more relaxed. There's sort of a darker tone that's come about by nature of the fact that we write about what whatever's going on with us. And there are some things that have gone on in our personal lives that have lent a much darker tone to this record.

"So we're coming from a slightly more serious standpoint than we were last time. 'Red Album' was us really relishing and having fun with ideas. This one was us moving beyond 'let's make as many wacky ideas as we can into songs,' and focusing to create something more streamlined and a bit more serious."

In addition to having a different, more serious vibe than 'Red Album,' 'Blue Record' has a fairly different sonic tone. The former was produced by Kylesa frontman Phillip Cope, who gave Baroness a sludgy, sweeping sound. For the new record, the group went to John Congleton (Explosions in the Sky, the Polyphonic Spree), who wasn't used to working with metal bands and used his intuition and creativity to achieve a primal buzz that was both chiming and abrasive.

"The production is drastically different, which I love," Baizley says. "We went to John because we wanted a sound that was the polar opposite of 'Red Album.' We never want to do the same thing twice."