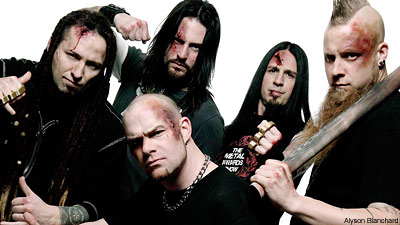 Mayhem Fest 2010 could be the event that defies the theory that two-thirds of the audience at summer festivals don't show up until after the first band has left the main stage. Indeed, Five Finger Death Punch could be as much of an attraction for this years Mayhem-goers as Lamb of God, and will likely appeal to fans of Korn -- if not Rob Zombie.

Five Finger Death Punch's propulsive, polished metal is lean and infectious, impacting somewhere between Disturbed and Papa Roach. And the band's latest album, 'War Is the Answer,' debuted at 7 on the 'Billboard 200' in September 2009, proving the dedication of their fans.

Finally, before Mayhem Fest 2010 launches, Five Finger Death Punch will play six dates in Canada with Korn, which might grease the wheels for Korn's fans who were previously unfamiliar with 5FDP. Their attitude might well be, "If Korn are taking these guys through Canada, maybe I should check 'em out."

What bands are you looking forward to seeing at Mayhem?

We toured with most of these bands at one time or another, so it will be a reunion to some degree. Korn always put on a good show and so do Lamb of God. We had a good time with booth of these bands, and actually, I have yet to see Rob Zombie live, so I'll definitely want to check him out.

We'll going to play songs from both records, basically cram the crowd favorites into our set. We'll probably play the Bad Company cover, ['Bad Company,'] since it is becoming a sing-along anthem at our shows. Our current tour has really cool visuals with lasers and giant machine guns and the crowd loves it, so we're already working on our stage set for Mayhem to see how much of our live set can be incorporated into that tour.

How are you planning on spending your downtime this summer at Mayhem?

We did it in '08. I think it will be the same this year -- pretty mellow. We'll all get together around the campfire, read poetry and talk about the mating seasons of bullfrogs and agriculture. Also, we regularly watch reruns of 'The Brady Bunch.' There are rumors about stuff like topless chicks racing minibikes or souped up golf carts flying into porta-potties and random fishponds, or people tied behind pickup trucks dirt-surfing refrigerators in parking lots. But that kind of stuff never really happens ... at all ... At least, I didn't see nothin', and you didn't hear it from me.