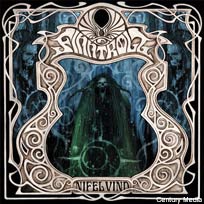 Finland's Finntroll releases their sixth studio album titled 'Nifelvind', on Century Media. Guitarist Skrymer -- whose real name is Samuli Ponsimaa and has done previous artwork for his folk-metal band -- designed the cover for this latest release.

Similar to the cover for 2008's 'Nattfödd', the cover for 'Nifelvind' features a sharp and bright patterned border that contrasts with the hazy dark colors behind it. Compare this to much of Ponsimaa's work seen on his page on Elfwood, which are mostly black-and-white pencil drawings or one-color pieces. Ponsimaa's depiction of trolls hunting in the forest on Finntroll's 'Jaktens Tid' is a good example of this, but it has since been more colorized for its re-release

Ponsimaa has done art for other bands, such as Norway's Glittertind and Finland's Moonsorrow.

Finntroll is touring all through March and April to support 'Nifelvind'.