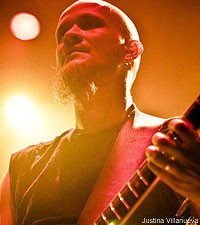 Barren Earth guitarist Janne Perttilä is serving as the live guitarist for Moonsorrow, who are currently on tour with Swallow the Sun on a trek that wraps up May 1. "In Moonsorrow, I'm just a live guitarist," Perttilä, a man who juggles many hats, told Noisecreep. "I'm only in the lineup playing all the live shows and not involved with the songwriting or the recording work, even though I do sing on all of the albums.

"In Moonsorrow, I basically just show up at the airport with my guitar and never worry about a thing! Barren Earth is obviously my main priority, since it's something I've been involved in creating from the start and in which I also have songwriting input. It's a lot more work for sure, but it's all pleasure to me!"

Perttilä was happy to escape the cold Finnish winter in order to tour with Moonsorrow. But he's the consummate multi-tasker who has a third (third?!?!) band that he plays in. He said, "Personally, I've just had a busy couple of months, in addition to the activities related for the release of the Barren Earth album. I just finished a new CD with my third band, Rytmihäiriö. So the tour has almost be like a holiday, leaving all these hectic schedules at home, cramming into a bus with all these old friends, opening a cold one and just concentrating on having fun and putting up a good show every night!"

He also said that packing for the tour was "a b----," since the band would be encountering "all the possible climates in continental U.S., and I'm not one to stay all day long in the comforts of the bus everywhere we go. But I'm not complaining!"

Perttilä isn't stressed about having his hands in so many metal pots, either, saying, "As long as I don't try forcing it, it's never been an issue. All the bands I'm involved in are so different from each other there's little danger of having them start to blend with each other and sounding the same. It's a matter of utilizing that specific frame of mind when you happen to hit a creative stride. When I'm mentally in Barren Earth zone, I don't even try writing any other stuff!"

Barren Earth's 'Curse of the Red River' is out now. The Moonsorrow/Swallow the Sun tour is currently traversing the West Coast.