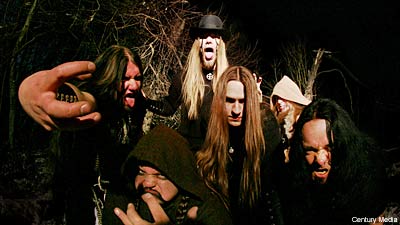 "Trollish music," according to Finntroll keyboardist Trollhorn, is "something Walt Disney would probably have used in his films if he had born in Scandinavia! It's a mixture between certain instrumentation with certain musical timbres, melodies and 'whatchamacallit,' if you ask me. Music is all about imagination, and if you sense trolls lurking behind your stereo equipment, you're probably listening to 'trollish music.' Did you double check your back door, by the way?"

OK, we just checked. There were no trolls there, until we started playing the band's latest, 'Nifelvind.' Trollhorn said the music "runs down your neck like the lasts drops of blood you´re about to suffocate on. On more earthly meanings, I love it as a package. Some days, I find some other songs better, some days some others. We have combined our metal with folk, world music, steam engines, movie soundtracks and human flesh. And if you don´t like it, go buy something else. Enter the Twilight Zone, get 'Nifelvind'and get welcomed to the jungle, baby!"

We guess Finntroll want to 'watch us bleed' with 'Nifelvind,' which is out March 9.