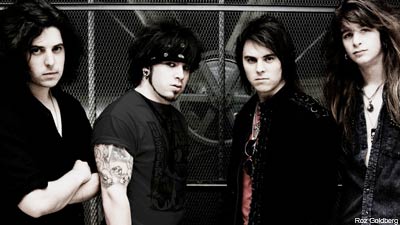 For many new bands, opening for established acts can be nerve-wracking, but for Arizona teen metal bashers Age of Evil, being in the presence of greatness is inspiring. That's why the quartet should have no problem opening for the new all-star band Hail! -- on Jan. 26 in New York City and Jan. 27 in Foxboro, Mass. -- which features ex-Megadeth bassist David Ellefson, Sepultura guitarist Andreas Kisser, ex-Judas Priest and Iced Earth singer Tim 'Ripper' Owens and Dream Theater drummer Mike Portnoy.

"We put our all into every show we play, and it's cool to know that other people have faith that we can hold our own against these really established bands," vocalist and guitarist Jeremy Goldberg told Noisecreep.

Not only are Age of Evil looking forward to opening for these icons, they can't wait to party with them after the show, as they've done with other metal veterans. "Some of the greatest times we've had were on the [ex-Savatage frontman] Jon Oliva tour," said Goldberg. "Those were some crazy times. There was puking everywhere, and there was lots of green stuff; lots of red light stuff in Germany, Copenhagen, Holland. You name it, we did it."

Maybe the reason Age of Evil aren't intimidated by rock stars is because they've been coached and guided by veterans since their earliest days in Scottsdale, Ariz. Ex-Megadeth guitarist Marty Friedman played a guest solo on their first album, 2007's 'Living a Sick Dream.' Their neighbor, Soulfly's Max Cavalera, invited them over for dinner and took them on tour. And they've share stages in Europe with Oliva, W.A.S.P., Tesla and others.

The band formed in 2005 as Mortuary Tribute and changed their name to Age of Evil at the end of 2006. Shortly after, they recorded 'Living a Sick Dream' with the help of Tom Gattis (ex-Tension, Ballistic), who suggested they cover Ballistic's 'Call Me Evil' on the record. The album was well-received in Europe and earned the band a spot on the 2007 Bang Your Head Festival in Tübingen, Germany, along with Amon Amarth, Dark Tranquillity, W.A.S.P., Amorphis, Finntroll and Onslaught.

"We had been getting a lot of press from our CD, and there had been a lot of attention in Germany. So the owners of the festival reached out to us two weeks before and said, 'Would you like to play the warm-up show?'" Goldberg recalled. "We made such a great impression we got to play on the main stage, and then they invited us back again the next year."

Age of Evil's Bang Your Head appearance sparked a major buzz that led to a European record deal. With the momentum surging, Age of Evil decided to record an EP of new originals, live songs and covers and release it in the U.S. as a way to earn a following back home. The only problem was Age of Evil were booked solid with shows in Europe and could only record the EP between tour dates.

"We recorded it over the summer in Europe with our engineer Ewe Lulis, who was in Grave Digger, and we didn't have a lot of time, especially with the vocals," Goldberg said. "I had very few chances to get it right, but that's all we needed."