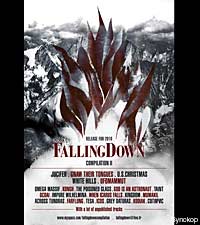 Fans of post-hardcore, post-rock, experimental music, doom and pure noise in all its glorious forms, take note! A number of the best, brightest and most intriguing stars in the metal galaxy have come together to take part in the second installment of the 'Falling Down' compilation series, which is due out in 2010 and will feature new and unreleased tracks from the likes of Jucifer, Gnaw Their Tongues, God Is an Astronaut, Ufomammut, Kongh, Mumakil, U.S. Christmas, Taint, Across Tundras, Impure Wilhelmina, Gray Daturas and many more.

Thibaut, one of the creators of the project, told Noisecreep, "At the moment, there are only three or four bands that will not have an unpublished track -- all of the other bands will give us a new song for this compilation. It's really a priority to make that happen.

"We choose the bands according to our tastes and desires -- internationally recognized bands and unknown, but equally-talented ones as well. There are still two or three bands to announce yet, we hope the best is yet to come ..."

A new band, the Poisoned Glass, was formed by S.Dahlquist (Asva, Sunn O))), Burning Witch) and Edgy59 (Burning Witch) solely to take part in the compilation. Over a dozen nationalities are represented in full on the CD, which will be limited to just 1,000 digipack copies and features artwork by Synckop. The first compilation, a 3-CD collection that featured never-before-heard songs from the likes of Pelican, Overmars, Kylesa, Rosetta, Knut and Dirge, was released in 2008.