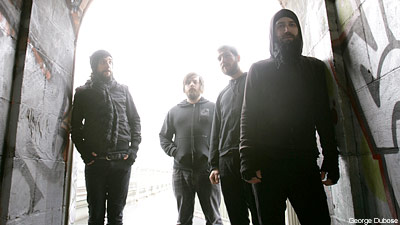 When Junius played Public Assembly back in March, every member of the band was dressed all in black at the Brooklyn, N.Y. venue. That is not out of the ordinary for touring metal bands. However, with the exception of drummer Dana Filloon, who was barefoot, each member was also wearing black, slip-on Vans.

"We made a choice to wear black clothes partly to create a uniformity that hopefully moves focus away from us as individuals and more on the music and experience as a whole. We don't want people to be thinking 'Hey, I wonder where that dude got those Nikes' when they watch us play," guitarist Michael Repasch-Nieves told Noisecreep.

Convenience has resulted in the band's bias for slip-on sneakers. And that they chose the same sneakers is coincidence, too, according to Rapasch-Nieves.

"I personally prefer them because, being vegetarian, I'm not into wearing leather, and I also think life's too short to spend time tying shoes. Same thing goes for shaving," he added. Despite the never-ending inconveniences of tour life, the bearded men in Junius have found ways to make it work for them. When a band tours as much as they do, that is a necessity.

"Getting to play our songs in front of a receptive audience is like payoff for the work we put into writing the music. It's also rewarding in the sense that we get to travel, see the world, and meet amazing people in the process," he said. "On the other hand, it definitely comes with its hardships: sleeping on floors, getting ripped off by shady promoters, vans getting broken into and breaking down. Personally, I prefer dealing with that stuff over 'real life,' but it does sometimes get old after a while."

Catch Junius on the road with God Is an Astronaut when they both tour Europe in May.