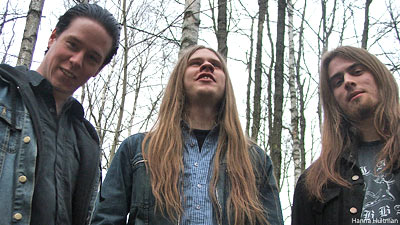 Swedish metallers Kongh don't look to their fellow musicians for inspiration as much as they do to directors like Stanley Kubrick and David Lynch, who've lensed eye-splitting classics like a 'A Clockwork Orange' and 'Mulholland Drive,' respectively.

"Rock 'n' roll music has been around for like 60 years, and the traditional way of writing rock songs just isn't what we're about," vocalist/guitarist David Johansson told Noisecreep. "Instead of looking at our songs as actual songs, we see them as musical journeys, dynamically built together by different passages through darkness and light, thunder and silence, despair and pleasure."

Kongh's tense, barge-like songs are the equivalent of cinematic movements with little regard for conventional form, structure and length; their shortest song clocks in at 11 minutes! "Some people seem to think that's long, but I don't think it's long at all," Johansson said. "We're not interested in being played on commercial radio or anything, so while we're not bound to any time limits, why not take the time we need to make the music express something deeper and more significant?

"Hearing a three-minute part of a Kongh song isn't enough to see the whole picture. Our music is meant to be experienced more like a movie or a story than like regular rock songs. Which directors would be better to mention than Kubrick and Lynch? Their surrealist atmospheres and unsettling moods [fit] our musical vision perfectly."

While Kongh is comprised of "three young fellows living in the middle-of-nowhere Sweden," Johansson said, "We spend our days thinking of riffs, wandering the forests, catching a fish every now and then and drinking beer on my balcony. The cities we live in are small with little going on."

It's been argued that the best art is a byproduct of boredom and Kongh are certainly using the time to get creative. "There used to be a few good pubs in my hometown Nässjö," Johansson said. "Recently, there was only one left because people are moving away and the pubs have to close. Now the last pub is closed as well, so we're spending even more time drinking beer on my balcony. Anyone who wants to visit is free to do so. We're friendly people."

Kongh's existence certainly isn't boring, as their first show was in their rehearsal space in front of 10 mental patients from a local psychiatric hospital. Their third show was a man's 50th birthday party. "The guy who owned the place was reported to the police the next day," Johansson said.

Kongh bassist Oskar works at an iron-melting factory, too. "Once he got a chunk of molten steel down his pants which left him in bed for two weeks, and once he got some in his left eye," Johansson said. "His physical health is in danger, and I'm worried." He also said drummer Tomas "has the ability to see ghosts under heavy influence of Polish liqour, often followed by heavy sleep in a vertical position." Perhaps it's all that beer on the balcony? Perhaps not.

Johansson himself used to be "badly addicted" to Swedish tobacco called Snus. "You put it under your upper lip, and it's quite strong," he said. "I had it in my mouth all day and I even slept with it. When the colour of the inside of my lip was a mix of green, brown, red, purple and black, I decided to quit." Sounds like a solid choice.

Kongh's second album, 'Shadows of the Shapeless,' will be released by Seventh Rule Recordings on March 30.