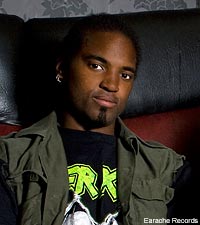 After the news was received stateside that bassist Mike Alexander of Evile had passed away in Sweden back in early October, the metal community united on one front to express their deepest condolences. Now the U.K. thrash outfit have announced news of two final shows taking place in December as a memorial to both former bandmate and dear friend as stated in a press release yesterday.

Included on both shows, labelmates Gama Bomb will also be performing along with Mutant and Seregon. In addition, limited edition and signed prizes will be raffled off during the shows and all funds raised will be going directly to the Alexander family.

In the release, Evile's lead guitarist, Ol Drake, states, " These two nights are for all the friends and fans of Mike who haven't had a real chance to say goodbye, and also for us to hold something a lot more appropriate than any funeral could be. Mike wasn't religious, and his beliefs were solely based in music, so there is no better way to say goodbye."

As well Gama Bomb's leading front man, Philly Byrne, shared his thoughts as well stating, "It's a real honour to play these shows for Mike. He was a star of a man and a brilliant friend, and it'll be great to do something for his family and friends. We're sure everyone will show their support for him at the shows."