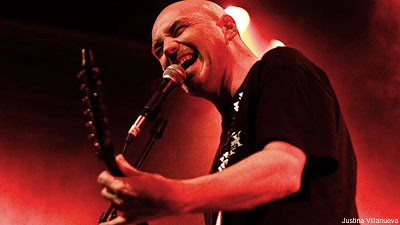 Ever try chewing chips with earplugs plugged into your ears? It sucks! Until God Dethroned plays in front of you -- drowning out the crunching sound. At least that's the lesson this writer learned when God Dethroned played Nokia Theater with Overkill, Vader, Warbringer, Evile and Woe of Tyrants. During songs, the chip party was awesome. But in between songs when the sweet sound of live death metal wasn't blaring, I had some really deep regrets about spending $2 on a small bag of chips.

"Lot's of crazy s--- going on here. You still having fun?" frontman Henri Sattler asked the crowd -- whom all seemed to be having fun. "Do you like our new guitar player?" he asked and got a similar reply.

"The only reason why he joined our band was so he could visit Amsterdam," Sattler said of touring guitarist Ian Jekelis -- whom also plays in Abigail Williams and is from Los Angeles.

Underneath God Dethroned's brand of death metal, there is some total Napalm Death and Opeth worship. And underneath Sattlers bald, shiny head, there is a new ripping guitar solo waiting to be recorded.

After the Killfest Tour, God Dethroned will play a couple of festivals in Europe. Their 2009 release -- 'Passiondale' -- is based on WWI's muddy Battle of Passchendaele. Interesting fact: Sattler played all the guitar parts on this album.