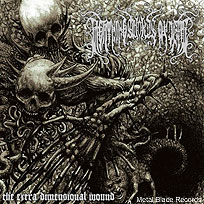 Los Angeles black/thrash metal band Lightning Swords of Death will release their second full-length album, 'The Extra Dimensional Wound' on May 25. The album was recorded in Corona, Calif. at Trench Studios and was produced by band guitarist Jeremy 'Roskva' Stramaglio. John Haddad produced and Sverker 'Necro' Widgren mixed and mastered the album at Necromorbus Studios in Stockholm, Sweden.

Several songs by Lightning Swords of Death were featured on the PSP game 'Undead Knights,' and one of their songs was in the soundtrack to the horror movie 'The Stepfather.'

In March, the band toured the Western and southern U.S. with Kreator, Kataklysm, Evile and Lazarus A.D. and opened for Immortal in Los Angeles. Lightning Swords of Death will play a one-off show on May 8 in Hollywood, Calif. and will tour with Abigail Williams from June 1 in Tuscon, Ariz. through June 6 in Anaheim, Calif.

3. Invoke the Desolate One

6. Venter of the Black Beast