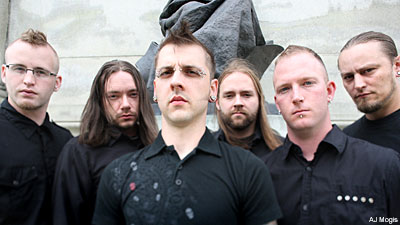 When you grow up in the middle of the country, in Lincoln, Nebraska, boredom can often channel an individual's creativity. "That's right, the middle of your country, the middle of nowhere, a place you know nothing about," Dirtfedd drummer Brock Wettstead told Noisecreep about his band's locus of operations. However, Dirtfedd's geographical locale actually helped, as opposed to hindered, their state of existence. Being in close physical proximity to the Midwestern monoliths known as Slipknot aided in Dirtfedd's ascent from the breadbasket into your living room.

"We started the band in April of 2002 and after four years of developing our art, we were introduced to Shawn Crahan of Slipknot in 2006," Wettstead said. "Living only two hours apart, it was easy for him to drive from Des Moines to Lincoln to check out our live show. From then on, we developed a relationship and he believed in our band 100 percent." The band got Crahan, AKA Clown, to sit up and take notice the old-fashioned way - via the live setting- and he eventually booked two showcases in New York City, which sparked the interest of record companies. Fast forward two-and-half years and Dirtfedd are releasing 'The American Nightmare' via E1 today.

Crahan produced the album, which Wettstead describes as "punishing with a tasteful sense of melody. We strive to deliver a relentless, violent wave of brutality without losing grasp of what's important: the song itself. Without the song, you have nothing. This band prides itself on having a good time and enjoying every minute life has to offer. So if you come to see a Dirtfedd show, prepare to do the same. Just drink some booze and lose your f-cking minds!" The band will spend the next two years on the road supporting 'The American Nightmare.'

"If you see that we're coming through your town, come and hang out with us. We're looking to make as many friends as possible during this journey. So until then, salute," Wettstead said. If Slipknot were impressed by Dirtfedd, maybe you should be too!