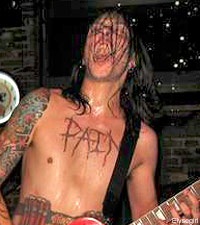 Another week is in the books, people, and the summer's just getting started (although it feels like Seattle in December here in New York City lately; what gives, Ma Nature?) This month, some of the summer's biggest tours will be kicking off, and we're psyched about that. We're also psyched about some of the stories we were able to bring you this week, and now, as we do every Saturday, let's take a look back at what went down here at Noisecreep.

+ David Carradine wasn't the only shocking death that happened this week. The metal world also lost a few of its own. Boško Radišic, who fronted Serbian thrash metal outfit Space Eater, was killed Tuesday (June 2) night in a fire that consumed his Belgrade apartment. He was 28. Guitarist Pat O'Brien, who was a member of thrash-prone hardcore outfit Cobra Clutch, died in his sleep on May 29 at the age of 24, leaving an infant daughter named Violet behind. And late last week, German Viking metallers StrydegoR announced that 20-year-old guitarist Slava Giebel had been killed in a fatal car wreck on May 23.

+ Metal producer du jour Jason Suecof spoke to Noisecreep about losing his man boobies, working with awesome bands like Evergreen Terrace, Black Dahlia Murder, and Job For a Cowboy, and shared his twisted sense of humor with us. Beware: This post includes cripple jokes.

+ Speaking of Job For a Cowboy, we caught up with the death metallers to discuss their forthcoming album, 'Ruination,' and the high hopes they have for the disc and we brought you an awesome video game based around Incubus' mustached mascot, Chuck.

+ We brought you a preview of this year's Bonnaroo Music Festival, which features Nine Inch Nails, Shadows Fall, and more, and we talked D.I.Y. record-making (quite literally) with the lads from the Chariot.

+ Def Leppard's Phil Collen talked to us about the death threats the band's received after it was announced they'd be touring with Poison, discussed giving up the grass with Devin Townsend, and NOFX frontman Fat Mike had some harsh words for Avenged Sevenfold.

+ We also caught up with Fear Factory's Raymond Herrera about his other band, Arkaea, spent some time with the dudes in Dirtfedd, chatted with Tom Morello about his new band, Street Sweeper Social Club, and Iwrestledabearonce's frontwoman Krysta Cameron told us she doesn't mind being compared to Björk.

+ Metallica's James Hetfeld and Eddie Van Halen laid the smacketh down, and Protest the Hero's Tim Millar gave us tips on tending to your man whiskers.