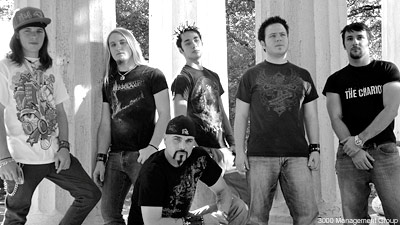 Remember Crossfade? The neo-grunge hard rockers who scored a massive hit in 2004 with the single "Cold" before fading from view? It's all coming back to you, right? The infectious, "I never meant to be so cold?" chorus is filling your cranium, isn't it? While Crossfade are currently working on new material and securing a new label deal, ex-DJ/vocalist Tony Byroads has started his own project, The Undivided.

"I left Crossfade in 2005 because I knew I had a higher purpose and there were also artistic differences between me and Ed Sloan, the other singer," Byroads told Noisecreep. "I love those guys to death, don't get me wrong. I wish them nothing but the best. I just knew that there was a more important reason for me to do music, to reach people's hearts."

After much searching on the web and the auditioning process, Byroads formed The Undivided, where he will contribute lead and backing vocals along with two other members. He said, "We ended up finding two singers and guitar players and we didn't want to choose between anyone, so we kept everyone. We have three guitar players!" Hey, Lynyrd Skynyrd and Iron Maiden have done it!" After auditioning 25 bassists until he found "the one" and locating a prodigy of a drummer, Byroads said, "We're ready to set the world ablaze with some killa rocking tunes. We just want people to feel our music in their hearts and souls and to know that we are there for them."

Byroads is incredibly optimistic about The Undivided's future, recalling that "Crossfade was very successful but I think that we will far surpass all the success Crossfade had because we have a higher purpose, a calling if you will, to rock the world for that purpose."

Listen to 'The Game'

Filed Under: crossfade, The Undivided, TheUndivided
Categories: Interviews
Comments
Leave A Comment
Back To Top