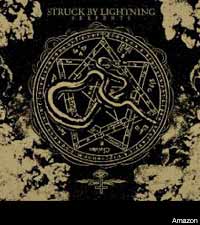 The work of Ryan Patterson from Auxiliary Design graces the front of Struck By Lightning's 'Serpents,' released on Translation Loss Records. "Greg from Struck By Lightning wanted an occult, dark vibe for the art, obviously centering around a serpent," Patterson recently told Noisecreep in an interview.

Adorning the monochromatic cover is a golden, symbolic medallion comprised of what seems to be a multi-pointed star with interwoven lines. Inscribed on the lines of the star, the circle surrounding it, and in many of the spaces in between are Roman letters. Though they don't form any coherent words -- at least in modern American English. Overlaying the entire symbol is a crawling snake.

"The art is inspired by Crowley," Patterson explained. "And other more archaic, occult and alchemical practitioners, the pioneers of exploring the dark and fascinating beyond what is taught to us by the mythology of religion."

Patterson has also done design work for bands like Coliseum, Magrudergrind and Lords.

Download Struck By Lightning Songs
Filed Under: coliseum, lords, Magrudergrind, struck by lightning, StruckByLightning
Categories: News
Comments
Leave A Comment
Magrudergrind Don’t Want to Tell Anyone What to ‘Believe’ or ‘Consume’
Coliseum Frontman Can’t Listen to Scraddily Diddly Every Night
Coliseum Tour Dates With Burning Love
Coliseum Reveal How a Misogynistic Movie Inspired a New Song
Coliseum: Signing to New Label Is ‘Friends Working With Friends’
Free Extreme Metal Comp to be Handed Out at Maryland Deathfest
Weedeater Have Nine Toes, and They ‘Suck’
Black Tusk Check in From Tour With Weedeater
East of the Wall Release Split With Rosetta, Tour With Goes Cube