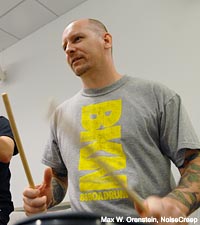 It's nearly impossible to read a Municipal Waste review without a mention of their dynamo drummer Dave Witte. The veteran musician has been a vital part of the metal and punk underground since the early '90s. His extensive resume includes work with Human Remains, Burnt By The Sun, Exit-13, Black Army Jacket, Discordance Axis and Melt Banana, among many others. Fans next chance to hear Witte will be Municipal Waste's upcoming album, 'Massive Aggressive,' which will arrive in stores this August.

Noisecreep caught up with the busy musician to talk shop and find out who some of his greatest drumming influences are.

Who was the drummer that first made you notice the instrument?

It's kinda hard to say. My uncle got me into drumming, and I learned playing along with AC/DC records, but I guess the first guy I wanted to be as a kid was Lars Ulrich. I was obsessed with Metallica for a while, and I learned everything. Then Slayer came into my life and Dave Lombardo was my hero and still is practically. That guy raised the metal bar higher than anyone ever has and in fact I don't think anyone in metal has been able to rise to what he has done fill or creativity wise. The double bass break in 'Angel of Death' is probably the catchiest stand-out metal drum fill of all time.

What mistakes did you make early on?

When you're learning, there are really no mistakes. It takes everyone different times to understand things I think. I wouldn't go back and learn a different way because that's what made me who I am today and most importantly it was fun.

Did you have any mentors?

Brandon Thomas of Ripping Corpse was always my biggest mentor. He was local, and I would watch him play all the time. I drew a ton of influence from him, and he was probably my main inspiration for a while. Best of all, we are great friends and it was easy to learn things from him. He's still fantastic and makes me laugh each time I see him play.

Everyone talks about your blast beat skills, but what is an aspect of your style that you would like to improve on?

I can always improve on everything. Just maintaining all your skills can be a challenge when you are in a heavy touring band. You only really rely on certain types of patterns playing the same set all year long ya know? I guess I would love to improve my practice techniques, routines and consistency.

You've played in a lot of bands and one-off projects, but is there anything you haven't done stylistically you would like to try in the future?

I always thought it would be cool to play some ska or rockabilly, since they both have so much energy and dynamics. I'd love to drum in the Boadrum again, that was the coolest thing I ever done as a drummer.

Who are some of your favorite drummers that you think more people should check out?

There are some really great players out there that not many people know of. I think everyone should track down some stuff by the following guys:

Pete Sandoval. I loved his technical approach. He is the master of the blast beat. He perfected it. There are many out there these days, but it was him first.

Dave Lombardo is my choice. Gene Hoglan is an animal in his own right though. His performance on Dark Angel's 'Darkness Descends' album is utterly amazing.

You mentioned 'Angel of Death,' but what are some of your other favorite drum fills in metal history?

The following songs have incredible fills and were crucial in my learning process during my early years: